The opening chapter introduces a little deserted child in a picturesque Cornish village. Her parents had died there in apartments, one after the other, the husband having married a governess against the wishes of his relations ; consequently, the wife was first neglected on her husband’s death ; and on her own sudden death, a few months later, the child was simply left to the care of the poor people of the village a dreamy, poetic little thing, whose one pleasure was to stroll in the twilight to the village churchyard and be with her mamma. Here she was found by Falkner, the principal character of the romance, who had selected this very spot to end a ruined existence ; in which attempt he was frustrated by the child jogging his arm to move him from her mother’s grave. His life being thus saved by the child’s instrumentality, he naturally became interested in her. He is allowed to look through the few remaining papers of the parents. Among these he finds an unfinished letter of the wife, evidently addressed to a lady he had known, and also indications who the parents were. He was much moved, and offered to relieve the poor people of the child and to restore her to her relations. 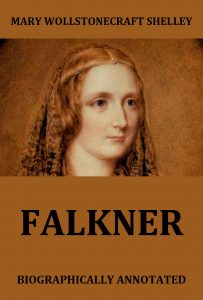