Mary in her novel of Lodore, published in 1835, gave a version of the differences between Harriet and Shelley. Though Lord Lodore is more an impersonation of Mary’s idea of Lord Byron than of Shelley, Cornelia Santerre, the heroine, may be partly drawn from Harriet, while Lady Santerre, her match-making mother, is taken from Eliza Westbrook. Lady Santerre, when her daughter is married, still keeps her under her influence. She is described as clever, though uneducated, with all the petty manoeuvring which frequently accompanies this condition. When differences arise between Lodore and his wife the mother, instead of counselling conciliation, advises her daughter to reject her husband’s advances. Under these circumstances estrangements lead to hatred, and Cornelia declares she will never quit her mother, and desires her husband to leave her in peace with her child. This Lodore will not consent to, but takes the child with him to America. The mother-in-law speaks of desertion and cruelty, and instigates law proceedings. By these proceedings all further hope is lost. 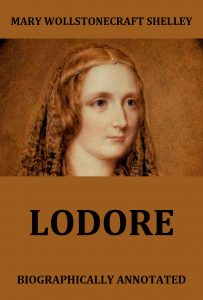