Freckles, a nameless Irish waif when the story opens, moved by the power of a mighty love, takes hold of his life, performs deeds of heroism in his guardianship of the Limberlost timber leases, and at length, through the help of the woman he loves, comes into possession of his name and patrimony. Other characters, only a little less interesting, are McLean, a member of the Grand Rapids Lumber Co., Freckles’ friend and boss; Lord O’More, who seeks a lost relative and finds him in the hero, and Black Jack, a handsome villian, whose thought of repentance comes too late. 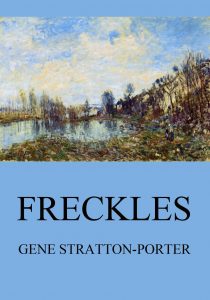