From the Mountains to the Sea – A History of Los Angeles

What the author of this book has to tell is the true story of a great City that was founded “by order of the King,” in the old days when the Western World was new. It is the story of a City that, for a century of time after its birth, showed few signs of promise, but which has now come to be the Greatest City of Western America and the metropolis of California— the “Land o’ Heart’s Desire.” The history of any city that can be named almost, is a story of its fortune that came from location or other accident to make it great. But Los Angeles is a City that was made great by the people, who one day found it sleeping in the sun, oblivious to its destiny. They were, for the most part, people who came from far regions of America, seeking a more agreeable climate than that to which they had been accustomed. This is the truth of the matter. 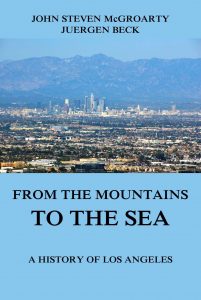 From the Mountains to the Sea – A History of Los Angeles

From the Mountains to the Sea – A History of Los Angeles.