“Harmonies of Political Economy”, the last and principal work of Frédéric Bastiat, has been translated by Mr. Stirling, who says of it, “This great work, the child of Bastiat’s anxious hopes, the subject of his dying thoughts, …. is perhaps the most important and the most original contribution which the science of Political Economy has received since the days of Adam Smith.” Its design is thus explained in the author’s own words: “I undertake in this work,” he says, “to demonstrate the harmony of those laws of Providence which govern human society. What makes these laws harmonious and not discordant is, that all principles, all motives, all springs of action, all interests, cooperate towards a grand final result, which humanity will never reach by reason of its native imperfection, but to which it will always approximate more and more by reason of its unlimited capability of improvement. And that result is, the indefinite approximation of all classes towards a level, which is always rising; in other words, the equalization of individuals in the general amelioration.” 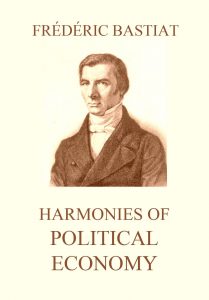