A retired Sherlock Holmes is drawn once more by Conan Doyle into the absorbing work of mystery by the rumblings of war which make him feel a duty to his country—though we secretly believe he was bored to death and hailed with delight any excuse to train his mental guns again! However, Mr. Holmes does not confine his detective work to international affairs alone — there was that little affair of the cardboard box containing two human ears, the curious case of Voodooism in England, and the time when Dr. Watson becomes so alarmed by the disguise that his friend assumes. Grotesqueries and brain twisting situations excite our wonder, torture our curiosity and often thrill that particular portion of the spine, which is reserved for gruesomeness and horror. 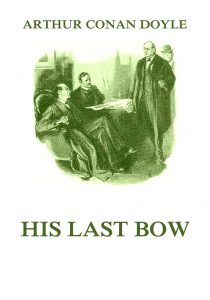