A collection of short stories, some of which have to do with the war. The longest and most noteworthy of the ten tales which make up this book is the one which gives its name to the collection. ” Danger!”. The most notable thing about “ Danger!” is the fact that it was written about a year and a half before the outbreak of the great war. The events related in it resemble so closely those which have actually transpired during those four years; but when one recollects that no one of these had happened at the date when it was written, it becomes a very remarkable bit of prophecy. 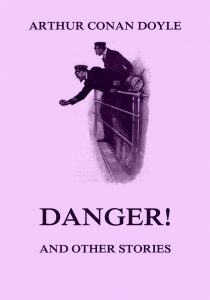