The editor and publisher of these volumes, which include not less than several hundred biographies spread across the six books, presents them confidently as a verified and authoritative history of the county – the result of conscientious labor in original research , and of information imparted by pioneers and their descendants , entered upon originally as a pastime and without thought of publication of the collated material. It essays to present county and city historical data that had lasting bearing on the times, but which with many of the picturesque incidents were ignored or overlooked in the publications that have gone before; and lastly it is an endeavor also to fill in the hiatus of the years from 1882 through the first World War, to bring to date the tale of the development and growth of a county which, from a small beginning with a rough and uncouth mining population and hardy pioneers, has become one of the richest, politically best governed and industrially typical of a great state. Incredible as their development and growth have been, through successive industrial epochs, the mind cannot grasp the future of State and County, now that the twin Sacramento and San Joaquin Valleys have reached the zenith of development and production. Today Fresno County is a leading contributor to California’s greater riches, enhanced production, and to the unmeasured happiness and prosperity of its citizens. Fresno is one of the state’s centers. A remarkable past will be eclipsed by a more wonderful future – it is manifest destiny. This is volume two out of six. 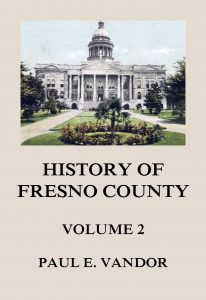 An historical review of the early times in Fresno County was published in a holiday number of the Expositor on New Year’s day of 1879. It was up to that time the most comprehensive one printed and since the most quoted because of its authenticity, written as it was by one who treated of personal knowledge and recollections, inclined though he was to be biased because of that personal participation in the events of the times recorded. That review, a sketchy effort, of no literary merit, treats incidentally of the lawlessness of the times, and declares that “numerous other murders and homicides” than those enumerated “were committed in different parts of the county” up to the period of writing, nearly all of them, he said, still fresh in the minds of citizens. Writing thirty-nine years ago of the early deeds of violence and crime, he employed the following words as pertinent then as they were for years after:

“Deeds of blood and violence were committed at lower and upper King’s River, at the San Joaquin River near Temperance Flat, at Firebaugh’s, at Buchanan, on the road leading from Crane Valley to Millerton, at or near the Tollhouse, at McKeown’s old store on the Fresno, at Texas Flats, at Fresno Flats, and in fact human life has been sacrificed in almost every neighborhood in the county where a whisky mill has been established. . . . But we will turn aside from the nauseating spectacle; a sufficient number of murders and deeds of violence has already been mentioned to demonstrate the lawlessness which has prevailed heretofore, and the laxity and almost criminal indifference with which the law was formerly administered by juries; it is not necessary here to go into further detail of the sickening atrocities which were committed and which appear today and for all time to come as black stains upon the record of the county.

“And if perhaps,” said this writer in conclusion, “twenty-eight years hence someone should see fit to continue the ‘Reminiscences of Fresno County’ it is to be fervently hoped that the recital will contain less crime and deeds of blood and violence than is interwoven in the history of our county for the twenty-eight years last past.”

Some of these recalled deeds of blood were of a time before organization of Fresno County out of Mariposa with the district seat of justice at Mariposa and the Fresno territory a remote corner of it. The early treatment of the Indian was characteristic of the cruel roughness of the times. The aborigine had apparently no rights that the white man seriously respected. He was given little consideration as a human being. Force, cruelty and taking advantage of his ignorance characterized the general dealings with him. This was all the more remarkable, when it is recalled how many of the first whites, in the absence of women of their own race, readily took up relations with the young squaws and profited materially thereby. The California Indian, although classed low in the scale of humanity, was at least racially docile and amenable to kindness and fair treatment. The squaws were invariably loyal to their white protectors. When by way of reprisal according to his view point, the Indian rebelled against the barbarity and cruelty of the white man, there was a hue and cry, an excited round up and the Indian fighting in self-defense when pursued was massacred and done for by superior armed force.

At this late day, it were vain to recall “the deeds of blood and violence” enumerated in the review of 1879. They have no bearing on the history of the times, save to emphasize the admitted lawless character of the period. Yet even in that respect, conditions were probably no more acute in the Fresno region than elsewhere in California in the pioneer days when there was little or no government, when human life was valued at so little and every one was a walking arsenal. Nor does one have to go back to the days of the pioneers to find warrant for the complaint of the almost criminal laxity with which justice was administered. Only once in the sixty-three years of county organization of Fresno has there been an execution of a murderer under the sentence of court. That was twenty-six years ago. And fearful murders were committed before and have been since. The wretch that was hanged in the courtyard of the old jail in rear of the courthouse was a dipsomaniac and a drug fiend. The others before and after him that cheated the hangman were given life sentences, or escaped altogether, though their crimes involved every legal element of fiendish deliberation, premeditation and preparation, with avarice as a motive for taking life.

As foul a deed as recorded in the criminal annals of the county was the murder in August, 1852, at the King’s River Indian reservation by Walter H. Harvey, county judge of Tulare, of Maj. James D. Savage, one of the most heroic and picturesque characters in Fresno County’s history. The effort to bring Harvey to justice, with the murderer appointing the special justice of the peace to hold the preliminary examination, was a travesty. After Savage’s death, many aspired to be his successor in gaining the prominence among and control over the Indians but no one filled his place — they felt like orphans and realized that their best friend was gone.

Next to be recorded is the bloody, meteoric and historic career of the bandit, Joaquin Murieta, which ended with his death in July, 1853. The retreat of this cutthroat was in the Cantua hills of the Coast Range in this county. At Millerton was made the first exhibition of the trophy of his decapitated head as proof of the successful termination of the man hunt for him, the killing of his principal lieutenants and the scattering of the bandit gang to the four winds, with peace returned to a sorely tried and raided state.

Murders of whites by whites and of prospectors by Indians were common in the 50’s. If the murderers did not escape, the grand jury ignored the charge, or if it found true bill the trial jury at Mariposa or Millerton acquitted. There was poetic justice in many of these cases. Very often these gun men died violent deaths with their boots on. Often also in these murders evidences were left to make it appear that the crimes were the work of Indians.

In 1858 there was an epidemic of burglaries of Chinese stores and mining camps and notorious among the thieves were Jack Cowan and one Hart, the first named a half breed Cherokee. They lay in concealment by day in cool retreat and at night sallied forth robbing inoffensive Chinese at point of pistol and hesitating not at sacrifice of life if their demands were not complied with or resisted. The pair was encountered one day in August by cattle rangers in the hills between the Fresno and the Chowchilla and a battle ensued. Hart was wounded, crippled for life and upon recovery from wounds was sent to the penitentiary. Cowan was shot through the skull and the perforated skull was in the possession of Dr. Leach as a paper weight on his desk as a memento for years.

The last serious Indian uprising was in the summer of 1856 among the Four Creek Indians of Tulare. The soldiers from Fort Miller under Captain Livingstone were dispatched to the scene of hostilities, also a company from Millerton and vicinity under Capt. Ira Stroud and another from Coarse Gold Gulch and Fresno River under Capt. John L. Hunt. The Fresno contingent achieved the name of “The San Joaquin Thieves.” The campaign over. Fort Miller was evacuated September 10, 1856.

It was reoccupied in August, 1863, by United States troops and a volunteer company under Col. Warren Olney was dispatched also. Acts of disloyalty were numerous. The offenders were rounded up at the fort and made to walk a beat carrying a bag of sand as a punishment. Peter van Valer was the provost marshal, and other disloyals were transported to cool their ardor in the military prison of the bleak and ocean wind swept Alcatraz Island in San Francisco Bay.

In 1863 the looting of Chinese stores and camps was resumed with at least eight known desperadoes in the gang. The China store at Andrew Johnson’s place at Coarse Gold Gulch was robbed three times and patience had ceased to be a virtue. A company of about a dozen men organized and one dark night in the dead winter of 1864 it invaded the camp of the desperadoes. Whether warned or not of the coming, only one of the gang — Al Dixon — was caught that night and found a corpse hanging from a tree next morning between Coarse Gold Gulch and the Fresno. The life of the brother” John, was interceded for and six of the gang left the county and were not again heard from. The eighth, James Raines, remained to weather it out and came in conflict with the provost marshal in the latter’s prosecution of his duties. A squad from the fort was sent to arrest him. Raines appeared pistol in hand to resist arrest and himself was shot and wounded in the arm. After having convalesced at the fort, Raines was taken to Alcatraz and spent several months at hard labor on the rock. Following release, he moved with his family to Raines’ Valley, cast of Centerville. He and others took up cattle and hog stealing until the neighborhood decided that it had enough of this business and one fine morning Raines’ carcass was found dangling from a tree in or near the valley that bears his name.