Mr. Stone seems to have intended this work for popular use; yet it is written with great care and commendable accuracy. The narrative, in many of its parts, is necessarily brief, but one can not notice a marked neglect. The history of New York City is divided into three periods, the settlement by the Dutch, the English conquest and the Revolutionary War, and the evacuation of the British. Every period is laid out before the reader in several chapters. 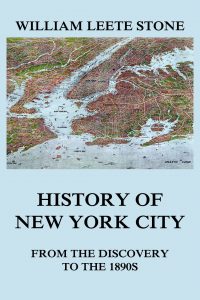