The preparation of a “History of Seattle” has been the exploration of a new field and the amount of patient research and careful investigation involved has been a task of colossal proportions. The printed and written records of the first twenty years of Seattle’s existence are scanty almost beyond belief. Not until 1863 was a newspaper established there and, for many years, more space in it was devoted to eastern and foreign politics than to the record of local passing events. Few, if any, pioneers kept diaries and none of these, except that of the writer, has been accessible. And yet has this work become one of the most detailed and accurate narratives of the history of this beautiful town on the West coast. A must read – and not only for Seattle citizens. This is volume two out of two. 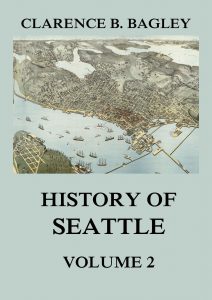 Seattle is a seaport city on the west coast of the United States and the seat of King County, Washington. With an estimated 704,352 residents as of 2016, Seattle is the largest city in both the state of Washington and the Pacific Northwest region of North America. In July 2013, it was the fastest-growing major city in the United States and remained in the Top 5 in May 2015 with an annual growth rate of 2.1%. In July 2016, Seattle was again the fastest-growing major U.S. city, with a 3.1% annual growth rate. The city is situated on an isthmus between Puget Sound (an inlet of the Pacific Ocean) and Lake Washington, about 100 miles (160 km) south of the Canada–United States border. A major gateway for trade with Asia, Seattle is the fourth-largest port in North America in terms of container handling as of 2015.

The Seattle area was previously inhabited by Native Americans for at least 4,000 years before the first permanent European settlers. Arthur A. Denny and his group of travelers, subsequently known as the Denny Party, arrived from Illinois via Portland, Oregon, on the schooner Exact at Alki Point on November 13, 1851. The settlement was moved to the eastern shore of Elliott Bay and named “Seattle” in 1852, after Chief Si’ahl of the local Duwamish and Suquamish tribes.

Logging was Seattle’s first major industry, but by the late-19th century, the city had become a commercial and shipbuilding center as a gateway to Alaska during the Klondike Gold Rush. Growth after World War II was partially due to the local Boeing company, which established Seattle as a center for aircraft manufacturing. The Seattle area developed as a technology center beginning in the 1980s, with companies like Microsoft becoming established in the region. In 1994, Internet retailer Amazon was founded in Seattle. The stream of new software, biotechnology, and Internet companies led to an economic revival, which increased the city’s population by almost 50,000 between 1990 and 2000.

Seattle has a noteworthy musical history. From 1918 to 1951, nearly two dozen jazz nightclubs existed along Jackson Street, from the current Chinatown/ International District, to the Central District. The jazz scene developed the early careers of Ray Charles, Quincy Jones, Ernestine Anderson, and others. Seattle is also the birthplace of rock musician Jimi Hendrix, origin of the bands Nirvana, Pearl Jam, Soundgarden, Alice in Chains and the alternative rock movement grunge.