The Juvenilia are the early works of Jane Austen, small essays, poems or plays that she compiled in three hand-written notebooks. 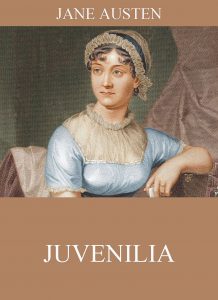 Mr. Johnson was once upon a time about 53; in a twelve-month afterwards he was 54, which so much delighted him that he was determined to celebrate his next Birthday by giving a Masquerade to his Children & Freinds. Accordingly on the Day he attained his 55th year, tickets were dispatched to all his Neighbours to that purpose. His acquaintance indeed in that part of the World were not very numerous, as they consisted only of Lady Williams, Mr. & Mrs. Jones, Charles Adams & the 3 Miss Simpsons, who composed the neighbourhood of Pammydiddle & formed the Masquerade.

Before I proceed to give an account of the Evening, it will be proper to describe to my reader the persons and Characters of the party introduced to his acquaintance.

Mr. & Mrs. Jones were both rather tall & very passionate, but were in other respects good tempered, wellbehaved People. Charles Adams was an amiable, accomplished, & bewitching young Man; of so dazzling a Beauty that none but Eagles could look him in the Face.

Miss Simpson was pleasing in her person, in her Manners, & in her Disposition; an unbounded ambition was her only fault. Her second sister Sukey was Envious, Spitefull, & Malicious. Her person was short, fat & disagreable. Cecilia (the youngest) was perfectly handsome, but too affected to be pleasing.

In Lady Williams every virtue met. She was a widow with a handsome Jointure & the remains of a very handsome face. Tho’ Benevolent & Candid, she was Generous & sincere; Tho’ Pious & Good, she was Religious & amiable, & Tho Elegant & Agreable, she was Polished & Entertaining.

The Johnsons were a family of Love, & though a little addicted to the Bottle & the Dice, had many good Qualities.

Such was the party assembled in the elegant Drawing Room of Johnson Court, amongst which the pleasing figure of a Sultana was the most remarkable of the female Masks. Of the Males, a Mask representing the Sun was the most universally admired. The Beams that darted from his Eyes were like those of that glorious Luminary, tho’ infinitely superior. So strong were they that no one dared venture within half a mile of them; he had therefore the best part of the Room to himself, its size not amounting to more than 3 quarters of a mile in length & half a one in breadth. The Gentleman at last finding the feirceness of his beams to be very inconvenient to the concourse, by obliging them to croud together in one corner of the room, half shut his eyes, by which means the Company discovered him to be Charles Adams in his plain green Coat, without any mask at all.

When their astonishment was a little subsided, their attention was attracted by 2 Dominos who advanced in a horrible Passion; they were both very tall, but seemed in other respects to have many good qualities. “These” said the witty Charles, “these are Mr. & Mrs. Jones.” and so indeed they were.

No one could imagine who was the Sultana! Till at length, on her addressing a beautifull Flora who was reclining in a studied attitude on a couch, with “Oh Cecilia, I wish I was really what I pretend to be”, she was discovered by the never failing genius of Charles Adams to be the elegant but ambitious Caroline Simpson, & the person to whom she addressed herself, he rightly imagined to be her lovely but affected sister Cecilia.

The Company now advanced to a Gaming Table where sat 3 Dominos (each with a bottle in their hand) deeply engaged; but a female in the character of Virtue fled with hasty footsteps from the shocking scene, whilst a little fat woman, representing Envy, sat alternately on the foreheads of the 3 Gamesters. Charles Adams was still as bright as ever; he soon discovered the party at play to be the 3 Johnsons, Envy to be Sukey Simpson & Virtue to be Lady Williams.

The Masks were then all removed & the Company retired to another room, to partake of an elegant & well managed Entertainment, after which, the Bottle being pretty briskly pushed about by the 3 Johnsons, the whole party (not excepting even Virtue) were carried home, Dead Drunk.

For three months did the Masquerade afford ample subject for conversation to the inhabitants of Pammydiddle; but no character at it was so fully expatiated on as Charles Adams. The singularity of his appearance, the beams which darted from his eyes, the brightness of his Wit, & the whole tout ensemble of his person had subdued the hearts of so many of the young Ladies, that of the six present at the Masquerade but five had returned uncaptivated. Alice Johnson was the unhappy sixth whose heart had not been able to withstand the power of his Charms. But as it may appear strange to my Readers, that so much worth & Excellence as he possessed should have conquered only hers, it will be necessary to inform them that the Miss Simpsons were defended from his Power by Ambition, Envy, & Self-admiration.

Every wish of Caroline was centered in a titled Husband; whilst in Sukey such superior excellence could only raise her Envy not her Love, & Cecilia was too tenderly attached to herself to be pleased with any one besides. As for Lady Williams and Mrs. Jones, the former of them was too sensible to fall in love with one so much her Junior, and the latter, tho’ very tall & very passionate, was too fond of her Husband to think of such a thing.

Yet in spite of every endeavour on the part of Miss Johnson to discover any attachment to her in him, the cold & indifferent heart of Charles Adams still, to all appearance, preserved its native freedom; polite to all but partial to none, he still remained the lovely, the lively, but insensible Charles Adams.

One evening, Alice finding herself somewhat heated by wine (no very uncommon case) determined to seek a relief for her disordered Head & Love-sick Heart in the Conversation of the intelligent Lady Williams.