Jacob Sprenger, German theologian of the 15th century, and Heinrich Kramer are the authors of the ‘Malleus Maleficarum’ or ‘Witch Hammer’ (1489), which first formulated in detail the doctrine of witchcraft, and formed a textbook of procedure for witch trials. They were appointed inquisitors under the bull ‘Summis desiderantes affectibus’ of Innocent VIII in 1484, and their work is arranged in three parts — ‘Things that pertain to Witchcraft’; ‘The Effects of Witchcraft’; and ‘The Remedies for Witchcraft.’ It discusses the question of the nature of demons; the causes why they seduce men, and particularly women; transformations into beasts, as wolves and cats; and the various charms and exorcisms to be employed against witches. 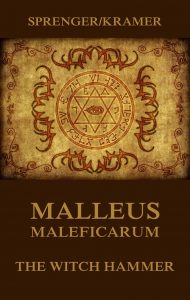 Background on the Witch Hammer (from wikipedia)

Magical acts and witchcraft had long been forbidden by the Church, whose attitude towards witchcraft was explained in the canon Episcopi written in about 900 AD. It stated that witchcraft and magic were just delusions and that those who believed in such things “had been seduced by the Devil in dreams and visions”. However, in the same period supernatural intervention was accepted in the form of ordeals that were later also used during witch trials. Possessions by the Devil are considered real even in present times by some Christians and it is a part of doctrine that demons may be cast out by appropriate sacramental exorcisms. In Malleus, exorcism is, for example, one of the five ways to overcome the attacks of incubi. Prayer and transubstantiation are traditionally excluded by Christians from the category of magical rites.

In 1484 clergyman Heinrich Kramer made one of the first attempts at prosecuting alleged witches in the Tyrol region. It was not a success: he was expelled from the city of Innsbruck and dismissed by the local bishop as “senile and crazy”. According to Diarmaid MacCulloch, writing the book was Kramer’s act of self-justification and revenge. Ankarloo and Clark claim that Kramer’s purpose in writing the book was to explain his own views on witchcraft, systematically refute arguments claiming that witchcraft did not exist, discredit those who expressed skepticism about its reality, claim that those who practised witchcraft were more often women than men, and to convince magistrates to use Kramer’s recommended procedures for finding and convicting witches.

Some scholars have suggested that following the failed efforts in Tyrol, Kramer requested explicit authority from Pope to prosecute witchcraft. Kramer received a papal bull Summis desiderantes affectibus in 1484. It allegedly gave full papal approval for the Inquisition to prosecute what was deemed to be witchcraft in general and also gave individual authorizations to Kramer and Dominican Friar Jacob Sprenger specifically. Other scholars have disputed the idea that Sprenger was working with Kramer, arguing that the evidence shows that Sprenger was actually a persistent opponent of Kramer, even going so far as to ban him from Dominican convents within Sprenger’s jurisdiction while also banning him from preaching. In the words of Wolfgang Behringer: “Sprenger had tried to suppress Kramer’s activities in every possible way. He forbade the convents of his province to host him, he forbade Kramer to preach, and even tried to interfere directly in the affairs of Kramer’s Séléstat convent… The same day Sprenger became successor to Jacob Strubach as provincial superior (October 19, 1487), he obtained permission from his general, Joaquino Turriani, to lash out adversus m[agistrum] Henricum Institoris inquisitorem (against Master Heinrich Kramer, inquisitor).”

The preface also includes an alleged unanimous approbation from the University of Cologne’s Faculty of Theology. Nevertheless, many historians have argued that it is well established by sources outside the “Malleus” that the university’s theology faculty condemned the book for unethical procedures and for contradicting Catholic theology on a number of important points : “just for good measure Institoris forged a document granting their apparently unanimous approbation.”

The book became the handbook for secular courts throughout Renaissance Europe, but was not used by the Inquisition, which “denied any authority to the Malleus” in the words of historian Wolfgang Behringer.

In modern times, the book has often been viewed as a typical inquisitorial manual, a perception that many historians have refuted. According to historian Jenny Gibbons: ‘in the 1970s, when feminist and Neo-Pagan authors turned their attention to the witch trials, the Malleus Maleficarum (Hammer of Witches) was the only manual readily available in translation. Authors naively assumed that the book painted an accurate picture of how the Inquisition tried witches. Heinrich Kramer, the text’s demented author, was held up as a typical inquisitor. His rather stunning sexual preoccupations were presented as the Church’s “official” position on witchcraft. Actually the Inquisition immediately rejected the legal procedures Kramer recommended and censured the inquisitor himself just a few years after the Malleus was published. Secular courts, not inquisitorial ones, resorted to the Malleus’.

Before 1400 it was rare for anyone to be persecuted for witchcraft, but the increasingly common persecution of heresy and failure to fully defeat those heretics paved the way for later criminal prosecution of witchcraft. By the 15th century belief in witches was widely accepted in European society. Previously, those convicted of witchcraft typically suffered penalties no more harsh than public penances such as a day in the stocks, but their persecution became more brutal following the publication of the Malleus Maleficarum, as witchcraft became widely accepted as a real and dangerous phenomenon. The most vigorous persecutions took place between years 1560 and 1630 ending in Europe around 1780.

Particularly in 16th and 17th centuries an intense discourse on the nature of witches preoccupied demonologists across Europe and they published many printed sermons, books and tracts. The Catholic Church played an important role in shaping of debate on demonology, but the discourse wasn’t much affected by the Reformation. Martin Luther was also convinced about the reality and evil of witches, and facilitated development of Protestant demonology. Catholic and Protestant demonologies were similar in their basic beliefs about witches and most writers agreed on the severity of the crime of witchcraft. It was accepted by both Catholic and Protestant legislatures and witch-hunting was undeniably sponsored by both Protestant and Catholic governments. Witches became heretics to Christianity and witchcraft became the greatest of crimes and sins. Within continental and Roman Law witchcraft was the crimen exceptum, a crime so foul that all normal legal procedures were superseded.

During the Age of Enlightenment, belief in the powers of witches to harm began to die out in the West. But the reasons for disbelief differed from those of early Christians. For the early Christians the reason was theological — that Christ had already defeated the powers of evil. For the post-Enlightenment Christians, the disbelief was based on a belief in rationalism and empiricism. Hayes urges “Past sins need to be acknowledged and confessed — so some kind of ‘truth and reconciliation’ commission is needed — not as a witch hunt, to accuse and punish the guilty, but to avoid the kind of denial that the Enlightenment imposed on the Great Witch Hunt in Europe — a denial that allowed the Great Witch Hunt to reincarnate itself in the horrors of Auschwitz [Holocaust] and the GULAG.”