If the only test of fiction is that it shall secure interest, then Mr. Wilkie Collins has succeeded to the full with this novel. The construction is almost perfect, and the interest is so graduated, and the plot so skillfully developed, that no portion can be skipped without loss. Mr. Collins is facile princeps in invention, and introduces no detail that is not of importance in reference to the whole. His novels, indeed, are too complete and self-contained to wholly satisfy any taste that is still simple enough to look at life as it is with anything of the pause and wonder that must often overtake the disinterested observer. There are so many loose threads always to be seen even upon the right side of the tapestry of life, that such an one is persecuted with the wish to get a look at the other side, which remains inscrutably hidden. No real story can ever be so completely told that everything at the end can be satisfactorily wound-up and disposed of. Mr. Wilkie Collins’s characters seldom go their own way. They are kept rigidly moving on the puppet-strings of his plot. He is versatile in his knack of pulling a very large number about so cleverly that, while they cross and recross each other’s paths in every imaginable way, they never really knock against each other. Take an instance: was it at all likely that Mr. Arnold Brinkworth, who was wholly unsuspicious of the risk he was running in visiting, as his wife, at Craig Fernie “Hottle,” the woman Mr. Geoffrey Delamayn had promised to marry, should have been so oblivious as not to have looked after the letter which he had carried to Anne Silvester, and with whose contents he was fully acquainted? Had he been alive to the risks he ran, his want of attention to her and her interests might have had some excuse. But the letter needed to be lost, to make the leading complication of the novel; and accordingly Bishopriggs, the smug waiter at the “hottle,” is called in to do his part. All the complications arise out of most glaring improbabilities; it is only Mr. Wilkie Collins’s consummate invention which, by decoy circlings, diverts the mind from dwelling on them in a way which would prove fatal to the story. 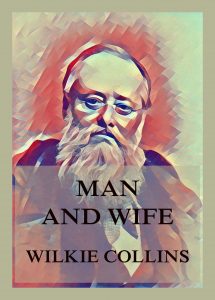 ON a summer’s morning, between thirty and forty years ago, two girls were crying bitterly in the cabin of an East Indian passenger ship, bound outward, from Gravesend to Bombay.

They were both of the same age—eighteen. They had both, from childhood upward, been close and dear friends at the same school. They were now parting for the first time—and parting, it might be, for life.

Both were the children of poor parents, both had been pupil-teachers at the school; and both were destined to earn their own bread. Personally speaking, and socially speaking, these were the only points of resemblance between them.

Blanche was passably attractive and passably intelligent, and no more. Anne was rarely beautiful and rarely endowed. Blanche’s parents were worthy people, whose first consideration was to secure, at any sacrifice, the future well-being of their child. Anne’s parents were heartless and depraved. Their one idea, in connection with their daughter, was to speculate on her beauty, and to turn her abilities to profitable account.

The girls were starting in life under widely different conditions. Blanche was going to India, to be governess in the household of a Judge, under care of the Judge’s wife. Anne was to wait at home until the first opportunity offered of sending her cheaply to Milan. There, among strangers, she was to be perfected in the actress’s and the singer’s art; then to return to England, and make the fortune of her family on the lyric stage.

Such were the prospects of the two as they sat together in the cabin of the Indiaman locked fast in each other’s arms, and crying bitterly. The whispered farewell talk exchanged between them—exaggerated and impulsive as girls’ talk is apt to be—came honestly, in each case, straight from the heart.

“Blanche! you may be married in India. Make your husband bring you back to England.”

“Anne! you may take a dislike to the stage. Come out to India if you do.”

“In England or out of England, married or not married, we will meet, darling—if it’s years hence—with all the old love between us; friends who help each other, sisters who trust each other, for life! Vow it, Blanche!”

“With all your heart and soul?”

“With all my heart and soul!”

The sails were spread to the wind, and the ship began to move in the water. It was necessary to appeal to the captain’s authority before the girls could be parted. The captain interfered gently and firmly. “Come, my dear,” he said, putting his arm round Anne; “you won’t mind me! I have got a daughter of my own.” Anne’s head fell on the sailor’s shoulder. He put her, with his own hands, into the shore-boat alongside. In five minutes more the ship had gathered way; the boat was at the landing-stage—and the girls had seen the last of each other for many a long year to come.

This was in the summer of eighteen hundred and thirty-one.

Twenty-four years later—in the summer of eighteen hundred and fifty-five—there was a villa at Hampstead to be let, furnished.

The house was still occupied by the persons who desired to let it. On the evening on which this scene opens a lady and two gentlemen were seated at the dinner-table. The lady had reached the mature age of forty-two. She was still a rarely beautiful woman. Her husband, some years younger than herself, faced her at the table, sitting silent and constrained, and never, even by accident, looking at his wife. The third person was a guest. The husband’s name was Vanborough. The guest’s name was Kendrew.

It was the end of the dinner. The fruit and the wine were on the table. Mr. Vanborough pushed the bottles in silence to Mr. Kendrew. The lady of the house looked round at the servant who was waiting, and said, “Tell the children to come in.”

The door opened, and a girl twelve years old entered, lending by the hand a younger girl of five. They were both prettily dressed in white, with sashes of the same shade of light blue. But there was no family resemblance between them. The elder girl was frail and delicate, with a pale, sensitive face. The younger was light and florid, with round red cheeks and bright, saucy eyes—a charming little picture of happiness and health.

Mr. Kendrew looked inquiringly at the youngest of the two girls.

“If you had not been a total stranger yourself for a whole year past,” answered Mrs. Vanborough, “you would never have made that confession. This is little Blanche—the only child of the dearest friend I have. When Blanche’s mother and I last saw each other we were two poor school-girls beginning the world. My friend went to India, and married there late in life. You may have heard of her husband—the famous Indian officer, Sir Thomas Lundie? Yes: ‘the rich Sir Thomas,’ as you call him. Lady Lundie is now on her way back to England, for the first time since she left it—I am afraid to say how many years since. I expected her yesterday; I expect her to-day—she may come at any moment. We exchanged promises to meet, in the ship that took her to India—‘vows’ we called them in the dear old times. Imagine how changed we shall find each other when we do meet again at last!”

“In the mean time,” said Mr. Kendrew, “your friend appears to have sent you her little daughter to represent her? It’s a long journey for so young a traveler.”

“A journey ordered by the doctors in India a year since,” rejoined Mrs. Vanborough. “They said Blanche’s health required English air. Sir Thomas was ill at the time, and his wife couldn’t leave him. She had to send the child to England, and who should she send her to but me? Look at her now, and say if the English air hasn’t agreed with her! We two mothers, Mr. Kendrew, seem literally to live again in our children. I have an only child. My friend has an only child. My daughter is little Anne—as I was. My friend’s daughter is little Blanche—as she was. And, to crown it all, those two girls have taken the same fancy to each other which we took to each other in the by-gone days at school. One has often heard of hereditary hatred. Is there such a thing as hereditary love as well?”

Before the guest could answer, his attention was claimed by the master of the house.

“Kendrew,” said Mr. Vanborough, “when you have had enough of domestic sentiment, suppose you take a glass of wine?”

The words were spoken with undisguised contempt of tone and manner. Mrs. Vanborough’s color rose. She waited, and controlled the momentary irritation. When she spoke to her husband it was evidently with a wish to soothe and conciliate him.

“I am afraid, my dear, you are not well this evening?”

“I shall be better when those children have done clattering with their knives and forks.”

The girls were peeling fruit. The younger one went on. The elder stopped, and looked at her mother. Mrs. Vanborough beckoned to Blanche to come to her, and pointed toward the French window opening to the floor.

“Would you like to eat your fruit in the garden, Blanche?”

Anne rose at once, and the two girls went away together into the garden, hand in hand. On their departure Mr. Kendrew wisely started a new subject. He referred to the letting of the house.

“The loss of the garden will be a sad loss to those two young ladies,” he said. “It really seems to be a pity that you should be giving up this pretty place.”

“Leaving the house is not the worst of the sacrifice,” answered Mrs. Vanborough. “If John finds Hampstead too far for him from London, of course we must move. The only hardship that I complain of is the hardship of having the house to let.”

Mr. Vanborough looked across the table, as ungraciously as possible, at his wife.

“What have you to do with it?” he asked.

Mrs. Vanborough tried to clear the conjugal horizon b y a smile.

“My dear John,” she said, gently, “you forget that, while you are at business, I am here all day. I can’t help seeing the people who come to look at the house. Such people!” she continued, turning to Mr. Kendrew. “They distrust every thing, from the scraper at the door to the chimneys on the roof. They force their way in at all hours. They ask all sorts of impudent questions—and they show you plainly that they don’t mean to believe your answers, before you have time to make them. Some wretch of a woman says, ‘Do you think the drains are right?’—and sniffs suspiciously, before I can say Yes. Some brute of a man asks, ‘Are you quite sure this house is solidly built, ma’am?’—and jumps on the floor at the full stretch of his legs, without waiting for me to reply. Nobody believes in our gravel soil and our south aspect. Nobody wants any of our improvements. The moment they hear of John’s Artesian well, they look as if they never drank water. And, if they happen to pass my poultry-yard, they instantly lose all appreciation of the merits of a fresh egg!”

This time the tone was almost brutal. Mrs. Vanborough looked at her husband with unconcealed surprise and distress.