Though perhaps this story does not equal, from a literary point of view, some of Collins’s previous efforts-it being less sensational and less complicated in its plot-it is, nevertheless, one of the best he has ever written. It is an able and eloquent protest against the false state of society and that cruel sentiment which prevents an erring woman ever returning to the path of virtue. Aside from its moral purpose, the story is exceedingly interesting. It should be read thoughtfully by everyone. 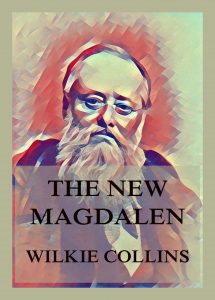 IT was a dark night. The rain was pouring in torrents.

Late in the evening a skirmishing party of the French and a skirmishing party of the Germans had met, by accident, near the little village of Lagrange, close to the German frontier. In the struggle that followed, the French had (for once) got the better of the enemy. For the time, at least, a few hundreds out of the host of the invaders had been forced back over the frontier. It was a trifling affair, occurring not long after the great German victory of Weissenbourg, and the newspapers took little or no notice of it.

Captain Arnault, commanding on the French side, sat alone in one of the cottages of the village, inhabited by the miller of the district. The Captain was reading, by the light of a solitary tallow-candle, some intercepted dispatches taken from the Germans. He had suffered the wood fire, scattered over the large open grate, to burn low; the red embers only faintly illuminated a part of the room. On the floor behind him lay some of the miller’s empty sacks. In a corner opposite to him was the miller’s solid walnut-wood bed. On the walls all around him were the miller’s colored prints, representing a happy mixture of devotional and domestic subjects. A door of communication leading into the kitchen of the cottage had been torn from its hinges, and used to carry the men wounded in the skirmish from the field. They were now comfortably laid at rest in the kitchen, under the care of the French surgeon and the English nurse attached to the ambulance. A piece of coarse canvas screened the opening between the two rooms in place of the door. A second door, leading from the bed-chamber into the yard, was locked; and the wooden shutter protecting the one window of the room was carefully barred. Sentinels, doubled in number, were placed at all the outposts. The French commander had neglected no precaution which could reasonably insure for himself and for his men a quiet and comfortable night.

Still absorbed in his perusal of the dispatches, and now and then making notes of what he read by the help of writing materials placed at his side, Captain Arnault was interrupted by the appearance of an intruder in the room. Surgeon Surville, entering from the kitchen, drew aside the canvas screen, and approached the little round table at which his superior officer was sitting.

“What is it?” said the captain, sharply.

“A question to ask,” replied the surgeon. “Are we safe for the night?”

“Why do you want to know?” inquired the captain, suspiciously.

The surgeon pointed to the kitchen, now the hospital devoted to the wounded men.

“The poor fellows are anxious about the next few hours,” he replied. “They dread a surprise, and they ask me if there is any reasonable hope of their having one night’s rest. What do you think of the chances?”

The captain shrugged his shoulders. The surgeon persisted.

“Surely you ought to know?” he said.

“I know that we are in possession of the village for the present,” retorted Captain Arnault, “and I know no more. Here are the papers of the enemy.” He held them up and shook them impatiently as he spoke. “They give me no information that I can rely on. For all I can tell to the contrary, the main body of the Germans, outnumbering us ten to one, may be nearer this cottage than the main body of the French. Draw your own conclusions. I have nothing more to say.”

Having answered in those discouraging terms, Captain Arnault got on his feet, drew the hood of his great-coat over his head, and lit a cigar at the candle.

“Where are you going?” asked the surgeon.

“To visit the outposts.”

“Do you want this room for a little while?”

“Not for some hours to come. Are you thinking of moving any of your wounded men in here?”

“I was thinking of the English lady,” answered the surgeon. “The kitchen is not quite the place for her. She would be more comfortable here; and the English nurse might keep her company.”

Captain Arnault smiled, not very pleasantly. “They are two fine women,” he said, “and Surgeon Surville is a ladies’ man. Let them come in, if they are rash enough to trust themselves here with you.” He checked himself on the point of going out, and looked back distrustfully at the lighted candle. “Caution the women,” he said, “to limit the exercise of their curiosity to the inside of this room.”

The captain’s forefinger pointed significantly to the closed window-shutter.

“Did you ever know a woman who could resist looking out of window?” he asked. “Dark as it is, sooner or later these ladies of yours will feel tempted to open that shutter. Tell them I don’t want the light of the candle to betray my headquarters to the German scouts. How is the weather? Still raining?”

“So much the better. The Germans won’t see us.” With that consolatory remark he unlocked the door leading into the yard, and walked out.

The surgeon lifted the canvas screen and called into the kitchen:

“Miss Merrick, have you time to take a little rest?”

“Plenty of time,” answered a soft voice with an underlying melancholy in it, plainly distinguishable though it had only spoken three words.

“Come in, then,” continued the surgeon, “and bring the English lady with you. Here is a quiet room all to yourselves.”

He held back the canvas, and the two women appeared.

The nurse led the way—tall, lithe, graceful—attired in her uniform dress of neat black stuff, with plain linen collar and cuffs, and with the scarlet cross of the Geneva Convention embroidered on her left shoulder. Pale and sad, her expression and manner both eloquently suggestive of suppressed suffering and sorrow, there was an innate nobility in the carriage of this woman’s head, an innate grandeur in the gaze of her large gray eyes and in the lines of her finely proportioned face, which made her irresistibly striking and beautiful, seen under any circumstances and clad in any dress. Her companion, darker in complexion and smaller in stature, possessed attractions which were quite marked enough to account for the surgeon’s polite anxiety to shelter her in the captain’s room. The common consent of mankind would have declared her to be an unusually pretty woman. She wore the large gray cloak that covered her from head to foot with a grace that lent its own attractions to a plain and even a shabby article of dress. The languor in her movements, and the uncertainty of tone in her voice as she thanked the surgeon suggested that she was suffering from fatigue. Her dark eyes searched the dimly-lighted room timidly, and she held fast by the nurse’s arm with the air of a woman whose nerves had been severely shaken by some recent alarm.

“You have one thing to remember, ladies,” said the surgeon. “Beware of opening the shutter, for fear of the light being seen through the window. For the rest, we are free to make ourselves as comfortable here as we can. Compose yourself, dear madam, and rely on the protection of a Frenchman who is devoted to you!” He gallantly emphasized his last words by raising the hand of the English lady to his lips. At the moment when he kissed it the canvas screen was again drawn aside. A person in the service of the ambulance appeared, announcing that a bandage had slipped, and that one of the wounded men was to all appearance bleeding to death. The surgeon, submitting to destiny with the worst possible grace, dropped the charming Englishwoman’s hand, and returned to his duties in the kitchen. The two ladies were left together in the room.

“Will you take a chair, madam?” asked the nurse.

“Don’t call me ‘madam,’” returned the young lady, cordially. “My name is Grace Roseberry. What is your name?”

The nurse hesitated. “Not a pretty name, like yours,” she said, and hesitated again. “Call me ‘Mercy Merrick,’” she added, after a moment’s consideration.

Had she given an assumed name? Was there some unhappy celebrity attached to her own name? Miss Roseberry did not wait to ask herself these questions. “How can I thank you,” she exclaimed, gratefully, “for your sisterly kindness to a stranger like me?”

“I have only done my duty,” said Mercy Merrick, a little coldly. “Don’t speak of it.”

“I must speak of it. What a situation you found me in when the French soldiers had driven the Germans away! My traveling-carriage stopped; the horses seized; I myself in a strange country at nightfall, robbed of my money and my luggage, and drenched to the skin by the pouring rain! I am indebted to you for shelter in this place—I am wearing your clothes—I should have died of the fright and the exposure but for you. What return can I make for such services as these?”

Mercy placed a chair for her guest near the captain’s table, and seated herself, at some little distance, on an old chest in a corner of the room. “May I ask you a question?” she said, abruptly.

“A hundred questions,” cried Grace, “if you like.” She looked at the expiring fire, and at the dimly visible figure of her companion seated in the obscurest corner of the room. “That wretched candle hardly gives any light,” she said, impatiently. “It won’t last much longer. Can’t we make the place more cheerful? Come out of your corner. Call for more wood and more lights.”