A curious story of two brothers who are tried for a murder and found guilty under strongly convicting circumstances. After pleading innocence of the crime, they strangely make a confession to the effect that they murdered the man, who at the last moment turns up alive. The author, in a note, says whatever seems improbable in the story is a fact, and whatever reads like truth is pure invention. Truth or fiction, however, the little book will while away an hour very pleasantly. 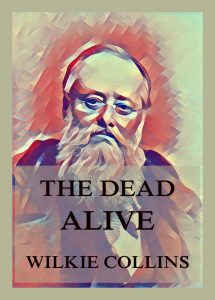 “I WANT to speak to you,” Naomi began “You don’t think ill of me for following you out here? We are not accustomed to stand much on ceremony in America.”

“You are quite right in America. Pray sit down.”

She seated herself by my side, looking at me frankly and fearlessly by the light of the moon.

“You are related to the family here,” she resumed, “and I am related too. I guess I may say to you what I couldn’t say to a stranger. I am right glad you have come here, Mr. Lefrank; and for a reason, sir, which you don’t suspect.”

“Thank you for the compliment you pay me, Miss Colebrook, whatever the reason may be.”

She took no notice of my reply; she steadily pursued her own train of thought.

“I guess you may do some good, sir, in this wretched house,” the girl went on, with her eyes still earnestly fixed on my face. “There is no love, no trust, no peace, at Morwick Farm. They want somebody here, except Ambrose. Don’t think ill of Ambrose; he is only thoughtless. I say, the rest of them want somebody here to make them ashamed of their hard hearts, and their horrid, false, envious ways. You are a gentleman; you know more than they know; they can’t help themselves; they must look up to you. Try, Mr. Lefrank, when you have the opportunity—pray try, sir, to make peace among them. You heard what went on at supper-time; and you were disgusted with it. Oh yes, you were! I saw you frown to yourself; and I know what that means in you Englishmen.”

There was no choice but to speak one’s mind plainly to Naomi. I acknowledged the impression which had been produced on me at supper-time just as plainly as I have acknowledged it in these pages. Naomi nodded her head in undisguised approval of my candor.

“That will do, that’s speaking out,” she said. “But—oh my! you put it a deal too mildly, sir, when you say the men don’t seem to be on friendly terms together here. They hate each other. That’s the word, Mr. Lefrank—hate; bitter, bitter, bitter hate!” She clinched her little fists; she shook them vehemently, by way of adding emphasis to her last words; and then she suddenly remembered Ambrose. “Except Ambrose,” she added, opening her hand again, and laying it very earnestly on my arm. “Don’t go and misjudge Ambrose, sir. There is no harm in poor Ambrose.”

“Should I be altogether wrong,” I asked, “if I guessed that you were a little partial to Ambrose?”

An Englishwoman would have felt, or would at least have assumed, some little hesitation at replying to my question. Naomi did not hesitate for an instant.

“You are quite right, sir,” she said with the most perfect composure. “If things go well, I mean to marry Ambrose.”

“If things go well,” I repeated. “What does that mean? Money?”

She shook her head.

“It means a fear that I have in my own mind,” she answered—“a fear, Mr. Lefrank, of matters taking a bad turn among the men here—the wicked, hard-hearted, unfeeling men. I don’t mean Ambrose, sir; I mean his brother Silas, and John Jago. Did you notice Silas’s hand? John Jago did that, sir, with a knife.”

“On purpose,” she answered. “In return for a blow.”

“Are you sure of what you say?” I inquired.

“I have it from Ambrose. Ambrose would never deceive me. Ambrose knows all about it.”

My curiosity was powerfully excited. To what sort of household had I rashly voyaged across the ocean in search of rest and quiet?

“Well, I will try and tell you what Ambrose told me. But you must promise me one thing first, sir. Promise you won’t go away and leave us when you know the whole truth. Shake hands on it, Mr. Lefrank; come, shake hands on it.”

There was no resisting her fearless frankness. I shook hands on it. Naomi entered on her narrative the moment I had given her my pledge, without wasting a word by way of preface.

“When you are shown over the farm here,” she began, “you will see that it is really two farms in one. On this side of it, as we look from under this tree, they raise crops: on the other side—on much the larger half of the land, mind—they raise cattle. When Mr. Meadowcroft got too old and too sick to look after his farm himself, the boys (I mean Ambrose and Silas) divided the work between them. Ambrose looked after the crops, and Silas after the cattle. Things didn’t go well, somehow, under their management. I can’t tell you why. I am only sure Ambrose was not in fault. The old man got more and more dissatisfied, especially about his beasts. His pride is in his beasts. Without saying a word to the boys, he looked about privately (I think he was wrong in that, sir; don’t you?)—he looked about privately for help; and, in an evil hour, he heard of John Jago. Do you like John Jago, Mr. Lefrank?”

“Just my sentiments, sir. But I don’t know: it’s likely we may be wrong. There’s nothing against John Jago, except that he is so odd in his ways. They do say he wears all that nasty hair on his face (I hate hair on a man’s face) on account of a vow he made when he lost his wife. Don’t you think, Mr. Lefrank, a man must be a little mad who shows his grief at losing his wife by vowing that he will never shave himself again? Well, that’s what they do say John Jago vowed. Perhaps it’s a lie. People are such liars here! Anyway, it’s truth (the boys themselves confess that), when John came to the farm, he came with a first-rate character. The old father here isn’t easy to please; and he pleased the old father. Yes, that’s so. Mr. Meadowcroft don’t like my countrymen in general. He’s like his sons—English, bitter English, to the marrow of his bones. Somehow, in spite of that, John Jago got round him; maybe because John does certainly know his business. Oh yes! Cattle and crops, John knows his business. Since he’s been overlooker, things have prospered as they didn’t prosper in the time of the boys. Ambrose owned as much to me himself. Still, sir, it’s hard to be set aside for a stranger; isn’t it? John gives the orders now. The boys do their work; but they have no voice in it when John and the old man put their heads together over the business of the farm. I have been long in telling you of it, sir, but now you know how the envy and the hatred grew among the men before my time. Since I have been here, things seem to get worse and worse. There’s hardly a day goes by that hard words don’t pass between the boys and John, or the boys and their father. The old man has an aggravating way, Mr. Lefrank—a nasty way, as we do call it—of taking John Jago’s part. Do speak to him about it when you get the chance. The main blame of the quarrel between Silas and John the other day lies at his door, as I think. I don’t want to excuse Silas, either. It was brutal of him—though he is Ambrose’s brother—to strike John, who is the smaller and weaker man of the two. But it was worse than brutal in John, sir, to out with his knife and try to stab Silas. Oh, he did it! If Silas had not caught the knife in his hand (his hand’s awfully cut, I can tell you; I dressed it myself), it might have ended, for anything I know, in murder—”

She stopped as the word passed her lips, looked back over her shoulder, and started violently.

I looked where my companion was looking. The dark figure of a man was standing, watching us, in the shadow of the elm-tree. I rose directly to approach him. Naomi recovered her self-possession, and checked me before I could interfere.

“Who are you?” she asked, turning sharply toward the stranger. “What do you want there?”

The man stepped out from the shadow into the moonlight, and stood revealed to us as John Jago.

“I hope I am not intruding?” he said, looking hard at me.

“What do you want?” Naomi repeated.

“I don’t wish to disturb you, or to disturb this gentleman,” he proceeded. “When you are quite at leisure, Miss Naomi, you would be doing me a favor if you would permit me to say a few words to you in private.”

He spoke with the most scrupulous politeness; trying, and trying vainly, to conceal some strong agitation which was in possession of him. His wild brown eyes—wilder than ever in the moonlight—rested entreatingly, with a strange underlying expression of despair, on Naomi’s face. His hands, clasped lightly in front of him, trembled incessantly. Little as I liked the man, he did really impress me as a pitiable object at that moment.

“Do you mean that you want to speak to me to-night?” Naomi asked, in undisguised surprise.