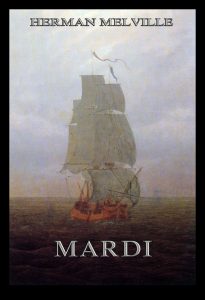 Mardi is Melville’s first pure fiction work (while featuring fictional narrators; his previous novels were heavily autobiographical). It details (much like Typee and Omoo) the travelings of an American sailor who abandons his whaling vessel to explore the South Pacific. Unlike the first two, however, Mardi is highly philosophical and said to be the first work to show Melville’s true potential. The tale begins as a simple narrative, but quickly focuses upon discourse between the main characters and their interactions with the different symbolic countries they encounter. While not as cohesive or lengthy as Moby-Dick, it shares a similar writing style as well as many of the same themes.

As a preface to Mardi, Melville wrote somewhat ironically that his first two books were nonfiction but disbelieved; by the same pattern he hoped the fiction book would be accepted as fact.