Pickle The Spy – The Incognito Of Prince Charles

Pickle The Spy – The Incognito Of Prince Charles – Andrew Lang

This is the peculiar title of a book that is making something of a literary sensation. This brilliant study of the betrayal and extinction of Jacobitism has triumphantly solved a mystery which once baffled all Europe. History has so far sought in vain to follow the wanderings and intrigues of Prince Charles Edward, the Young Pretender, after his expulsion from France in the last days of 1748. “From this time forward,” says Lord Stanhope, writing of the time when the Prince quitted Avignon early in 1749, “his proceedings during many years are wrapped in mystery; all his correspondence passed through the hands of Mr. Walters”–according to Mr. Lang the name should be Waters-“his banker at Paris, even his warmest partisans were seldom made acquainted with his place of abode, and though he still continued to write to his father at intervals, his letters were never dated. Neither friends nor enemies at that time could obtain any certain information of his movements or designs. Now, however, it is known that he visited Venice and Germany, that he resided secretly for some time at Paris, that he undertook a mysterious journey to England in 1750, and perhaps another in 1752 or 1753; but his principal residence was in the territory of his friend the Dukede Bouillon, where, surrounded by the wide and lonely forest of Ardennes, his active spirit sought in the dangerous chase of boars and wolves an image of the warlike enterprise which was denied him. It was not till the death of his father in 1766 that he returned to Rome and became reconciled to his brother. But his character had darkened with his fortunes.” 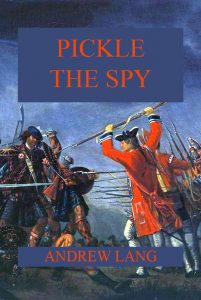 Pickle The Spy – The Incognito Of Prince Charles

Pickle The Spy – The Incognito Of Prince Charles.

The life of Pickle the Spy (from Wikipedia):

MacDonnell was born about 1725, the eldest son of John, twelfth chief, by the only daughter of Colin Mackenzie of Hilton. While still a youth he was sent in 1738 to France, where in 1743 he joined Lord John Drummond, 4th Duke of Perth’s (Duke after 1746) Régiment Royal-Écossais, in which he was given the command of a company. In March 1744, he was with the George Keith, 10th Earl Marischal, and intended starting with the well-manned, well-armed and well-led French expedition of that year to invade Britain, but which came to disaster as a result of a destructive storm. Having in the following year been sent to Scotland to give information in connection with certain Jacobite disputes, he was in May despatched by the Highland chiefs to France to testify to Charles their allegiance to his cause, but at the same time to warn him against an attempt to land in Scotland unless strongly backed by foreign assistance. His mission, however, was of no avail; for Charles, before Macdonell’s arrival in France, had already set sail on his attempt to regain his family’s thrones. Macdonell resolved to take part in it, but while returning to Scotland with a detachment of Drummond’s French regiment “Royal Écossois” he was captured on 25 November 1745 by H.M.S. Sheerness, and sent to the Tower of London, where he was detained until July 1747. In December 1749, he helped himself to the Jacobite treasure concealed at Loch Arkaig. Already or shortly afterwards he had further resolved on the betrayal of the Jacobite cause, and having introduced himself to Henry Pelham, he, as Mr. Lang has demonstrated, became a hired spy on Prince Charles and the Jacobites, corresponding with the government under the pseudonym of Pickle.

Macdonell may have all along cherished resentment against the prince on account of the clan’s removal to the left wing at Culloden. Though the clan gave the prince shelter during his wanderings, Macdonell himself may on account of the treatment of the clan, or for some other reason, have cherished a personal grudge against the prince. In any case he may have believed that the Stuart cause was irretrievably lost; and his interest corresponding with his convictions, he may have persuaded himself that he was really saving his clan and the highlands generally from much needless suffering by frustrating the prince’s further schemes. If, however, his purpose was mainly selfish, it was unsuccessful, for the death of Pelham in 1754 blighted his main hopes of reward. On the death of his father in September 1754, he became chief of the clan and succeeded to his father’s impoverished fortunes. He died in 1761 in a hut adjoining his ruined castle, and having no issue was succeeded in the chieftaincy by his nephew Duncan, son of his brother Æneas, who was slain at Falkirk.

During the Jacobite rising of 1745 the command of the Glengarry clan was, on account of the imprisonment of the chief, and of Alastair the chiefs eldest son, entrusted to the second son, Æneas; but in the absence of Æneas in the highlands to procure reinforcements, the clan was, while on the march southwards to Derby, under the charge of Colonel Donald Macdonald of Lochgarry; and after the death of Æneas at Falkirk, Lochgarry accompanied the prince in his later wanderings and escaped with him to France, whence he wrote to his chief a ‘memorial’ detailing the clan’s achievements during the rebellion and its loyal conduct to the prince while a fugitive in its fastnesses.