Jerome A. Watrous, the author of the first volume, and Josiah Seymour Currey, the compiler of the biographical volumes two through five, present a thrilling narrative and in-depth-biographies of an eventful past of a county, the rapid growing of a fantastic city on the lakeshore, and the lives of hundreds of people that were so important for the history of Milwaukee town and country. The whole five books contain thousands of pages of valuable information and are essential for everyone interested in the history the most populous and densely populated county in Wisconsin. This is volume five out of five, containing a wealth of biographies of important people. 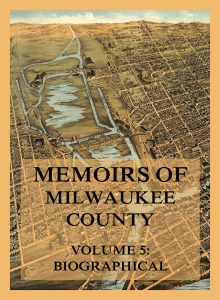 Eugene Worthing, one of the progressive business men of Milwaukee, is a representative of one of its best business interests as president of the Bayley Manufacturing Company with plant at 732 to 760 Greenbush street. He was born at Centre, Rock county, Wisconsin, on the 14th of February, 1864, on his father’s farm, his parents being Ira and Mary E. (Irving) Worthing, both deceased. The father was a native of Palermo, Maine, and moved to Wisconsin as a young man. His demise occurred in 1889, at the age of seventy-three years. Mrs. Worthing was born in Old Town, Maine, and passed away in 1899, having survived her husband ten years.

In the acquirement of an education Eugene Worthing attended the common schools at Centre and the Evansville Seminary, all in Wisconsin, and in due time entered Bryant & Stratton Business College at Chicago. Upon completion of the course he accepted a position as stenographer for the B. F. Sturtevant Company of Boston in its branch office at Chicago and for twenty years was active in that connection, during that time doing much to further the interests of the company. When he severed his relations with that company he was manager of the branch office and had learned every phase of the blowing, heating and ventilating business. His next position was as sales agent for the Buffalo Forge Company, in connection with Edwin M. Bassler, operating under the name of Worthing, Bassler & Company at Chicago, and he maintained that association for three years. In 1913 the company left Chicago and located in Milwaukee, where they purchased the business of the Bayley Manufacturing Company, an old and established concern of the city. Mr. Worthing is president, W. C. Kussmaul, secretary and treasurer, and E. M. Bassler, vice president and engineer. They are the manufacturers of fan system and ventilating equipment, planing mill exhausters, pressure blowers, etc., and automatic and throttling type horizontal and vertical steam engines. They are likewise specialists in leather drying and are heating, ventilating and drying engineers.

On the 2nd of July, 1892, Mr. Worthing was united in marriage to Miss Rose B. Meredith, a daughter of Edwin Meredith of Wales, who came to America at an early day and located at Attica, Wisconsin. In that community the birth of Mrs. Worthing occurred. Mr. and Mrs. Worthing have a daughter, Helen, who is living at home.

Since attaining his majority Mr. Worthing has been a supporter of the republican party but has ever reserved the right to vote independently, should he think another party’s candidate the best man for the office. He takes an active interest in political affairs and is well informed on all important questions and issues of the day. The religious faith of the family is that of the Presbyterian church. They are members of the Westminster church, of which Mr. Worthing is one of the trustees. He is affiliated with no secret societies but holds membership in the Association of Commerce and the City Club. Improvement and advancement have been Mr. Worthing’s watchwords and he has never lost sight of the fact that each year should record a growth in business. Straightforward and reliable under all circumstances, courteous and affable to his patrons, Mr. Worthing endeavors to please and he has so conducted his business affairs as to reflect credit and honor, not only upon himself, but upon the city in which he resides. Mr. Worthing and family reside at 534 Stowell avenue.

John Raymond Schoonmaker of the Schoonmaker Construction Company, in which he is a partner of his brother and father, was born November 29, 1887, at Wauwatosa, in the first frame house erected west of Milwaukee. His father, Harry Ogden Grant Schoonmaker, was born on the 4th of July, 1863 — the day on which General Grant captured Vicksburg — and is now living in Wauwatosa. He remains active in connection with construction interests, especially in the building of municipal and country roads and also in the execution of paving contracts. He is a partner in the Schoonmaker Construction Company, in which he is associated with his two sons. He was born in Wauwatosa, being a representative of one of the old pioneer families of this section of the state. His father was John N. Schoonmaker, who was born in Albany, New York, and was a representative of one of the oldest American families, the ancestral line in the United States being traced back to 1663. The town of Schoonmakerville on the Hudson is named in honor of this family, the first settlement being made at that place. John N. Schoonmaker. the grandfather of John Raymond Schoonmaker, was born in Albany, New York, and became a resident of Wauwatosa in 1856. He engaged in the manufacture of lime and also in the business of supplying stone to the rolling mills. He established what is now the G. D. Francey Coal, Stone & Supply Company, opening a quarry, and remained an active factor in the business circles of the community until his demise. He was also a man of prominence in other connections and did not a little to shape public thought and action. In the maternal line John R. Schoonmaker comes of English ancestry. His mother, who bore the maiden name of Catherine Elizabeth Pilgrim, was born at Granville, Wisconsin, on a farm that belonged to her father, Daniel Thomas Pilgrim, a native of England. Mrs. Schoonmaker died April 3, 1922. Both she and her husband were widely known in Wauwatosa and Milwaukee.

John R. Schoonmaker obtained his early education in the public schools of Wauwatosa and was there graduated from the high school with the class of 1905. Immediately afterward he turned his attention to construction work, with which he has since been connected. In 1916 he became associated in business with Walter G. Winding, under the firm style of Schoonmaker & Winding, and together they built two and a half miles of the Silver Spring cement road, a mile and a half of the Chicago cement road and also executed other important contracts. The partnership existed until 1918, when Mr. Schoonmaker entered the army, being assigned to Evacuation Hospital. No. 37. The unit was formed at Camp Grant and was stationed at Joinville, Sebastian Barracks, near Toul, in France, after being sent overseas. Mr. Schoonmaker spent seven months in France and was discharged as first class sergeant on the 13th of June, 1919. When the country no longer needed his military aid he returned and again began business operations in Milwaukee. Here he worked for S. P. Croft, superintending road grading, and in October, 1919, he began operating independently by taking a contract for concrete paving in North Milwaukee. He also did concrete work for Milwaukee county in connection with the heating of the infirmary. It was in October, 1919, that he organized the Schoonmaker Construction Company in connection with his father and his brother, Ogden Grant Schoonmaker, and the firm has since conducted a profitable business. Many important contracts have been accorded them and they now employ a large force of workmen. Over their place of business flies the flag which was used in conveying the first load of soldiers from Wauwatosa to Milwaukee on their way to active service in the Civil war.

On the 7th of November, 1917, Mr. Schoonmaker was married to Miss Lillian Alberta Goldthorp, a daughter of the Rev. Charles Edward Goldthorp. a Methodist minister, who at one time was presiding elder of the Oshkosh district. He was a native of England but spent the greater part of his life in this country and died in June, 1918. Mr. and Mrs. Schoonmaker have one child. Jane Elizabeth.

Fraternally Mr. Schoonmaker is connected with Wauwatosa Lodge No. 267. A. F. & A. M., and also with Wauwatosa Chapter, R. A. M., and Milwaukee Lodge, B. P. O. E., No. 46. He is post commander of Bernard A. Diedrich Post, No. 78, of the American Legion at Wauwatosa and is in hearty sympathy with the high standards of this organization, which is seeking so earnestly to maintain American principles, as did its members when khaki-clad they followed the stars and stripes to the battle fields of the old world. Mr. Schoonmaker belongs to the Kiwanis Club and to the Milwaukee Athletic Club. He is fond of all athletics and manly outdoor sports, is a promoter of basket-ball and during his school days was an enthusiastic football player. His political allegiance has always been given to the republican party but never as an active politician. He belongs to the Wauwatosa Methodist Episcopal church and the principles of his life have found expression in many sterling qualities which have gained him the honor and high regard of his fellowmen. He has always been progressive and enterprising in business, loyal and patriotic in citizenship and stands as a splendid example of American manhood and chivalry.