“In relation to the purely literary side of the question,” as Mr. Wilkie Collins says, there can be no doubt that his studies of character in ‘My Lady’s Money’ do seem to be drawn from nature. The story is constructed with his accustomed skill, the details fit together as usual with the precision of the facts in a criminal trial. 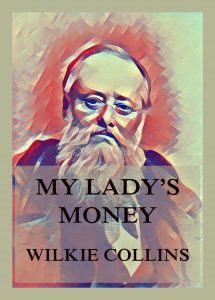 “MY nephew!” Lady Lydiard exclaimed in a tone which expressed astonishment, but certainly not pleasure as well. “How many years is it since you and I last met?” she asked, in her abruptly straightforward way, as Mr. Felix Sweetsir approached her writing-table.

The visitor was not a person easily discouraged. He took Lady Lydiard’s hand, and kissed it with easy grace. A shade of irony was in his manner, agreeably relieved by a playful flash of tenderness.

“Years, my dear aunt?” he said. “Look in your glass and you will see that time has stood still since we met last. How wonderfully well you wear! When shall we celebrate the appearance of your first wrinkle? I am too old; I shall never live to see it.”

He took an easychair, uninvited; placed himself close at his aunt’s side, and ran his eye over her ill-chosen dress with an air of satirical admiration. “How perfectly successful!” he said, with his well-bred insolence. “What a chaste gayety of color!”

“What do you want?” asked her Ladyship, not in the least softened by the compliment.

“I want to pay my respects to my dear aunt,” Felix answered, perfectly impenetrable to his ungracious reception, and perfectly comfortable in a spacious arm-chair.

No pen-and-ink portrait need surely be drawn of Felix Sweetsir—he is too well-known a picture in society. The little lithe man, with his bright, restless eyes, and his long iron-gray hair falling in curls to his shoulders, his airy step and his cordial manner; his uncertain age, his innumerable accomplishments, and his unbounded popularity—is he not familiar everywhere, and welcome everywhere? How gratefully he receives, how prodigally he repays, the cordial appreciation of an admiring world! Every man he knows is “a charming fellow.” Every woman he sees is “sweetly pretty.” What picnics he gives on the banks of the Thames in the summer season! What a well-earned little income he derives from the whist-table! What an inestimable actor he is at private theatricals of all sorts (weddings included)! Did you never read Sweetsir’s novel, dashed off in the intervals of curative perspiration at a German bath? Then you don’t know what brilliant fiction really is. He has never written a second work; he does everything, and only does it once. One song—the despair of professional composers. One picture—just to show how easily a gentleman can take up an art and drop it again. A really multiform man, with all the graces and all the accomplishments scintillating perpetually at his fingers’ ends. If these poor pages have achieved nothing else, they have done a service to persons not in society by presenting them to Sweetsir. In his gracious company the narrative brightens; and writer and reader (catching reflected brilliancy) understand each other at last, thanks to Sweetsir.

“Well,” said Lady Lydiard, “now you are here, what have you got to say for yourself? You have been abroad, of course! Where?”

“Principally at Paris, my dear aunt. The only place that is fit to live in—for this excellent reason, that the French are the only people who know how to make the most of life. One has relations and friends in England and every now and then one returns to London—”

“When one has spent all one’s money in Paris,” her Ladyship interposed. “That’s what you were going to say, isn’t it?”

Felix submitted to the interruption with his delightful good-humor.

“What a bright creature you are!” he exclaimed. “What would I not give for your flow of spirits! Yes—one does spend money in Paris, as you say. The clubs, the stock exchange, the race-course: you try your luck here, there, and everywhere; and you lose and win, win and lose—and you haven’t a dull day to complain of.” He paused, his smile died away, he looked inquiringly at Lady Lydiard. “What a wonderful existence yours must be,” he resumed. “The everlasting question with your needy fellow-creatures, ‘Where am I to get money?’ is a question that has never passed your lips. Enviable woman!” He paused once more—surprised and puzzled this time. “What is the matter, my dear aunt? You seem to be suffering under some uneasiness.”

“I am suffering under your conversation,” her Ladyship answered sharply. “Money is a sore subject with me just now,” she went on, with her eyes on her nephew, watching the effect of what she said. “I have spent five hundred pounds this morning with a scrape of my pen. And, only a week since, I yielded to temptation and made an addition to my picture-gallery.” She looked, as she said those words, towards an archway at the further end of the room, closed by curtains of purple velvet. “I really tremble when I think of what that one picture cost me before I could call it mine. A landscape by Hobbema; and the National Gallery bidding against me. Never mind!” she concluded, consoling herself, as usual, with considerations that were beneath her. “Hobbema will sell at my death for a bigger price than I gave for him—that’s one comfort!” She looked again at Felix; a smile of mischievous satisfaction began to show itself in her face. “Anything wrong with your watch-chain?” she asked.

Felix, absently playing with his watch-chain, started as if his aunt had suddenly awakened him. While Lady Lydiard had been speaking, his vivacity had subsided little by little, and had left him looking so serious and so old that his most intimate friend would hardly have known him again. Roused by the sudden question that had been put to him, he seemed to be casting about in his mind in search of the first excuse for his silence that might turn up.

“I was wondering,” he began, “why I miss something when I look round this beautiful room; something familiar, you know, that I fully expected to find here.”

“Tommie?” suggested Lady Lydiard, still watching her nephew as maliciously as ever.

“That’s it!” cried Felix, seizing his excuse, and rallying his spirits. “Why don’t I hear Tommie snarling behind me; why don’t I feel Tommie’s teeth in my trousers?”

The smile vanished from Lady Lydiard’s face; the tone taken by her nephew in speaking of her dog was disrespectful in the extreme. She showed him plainly that she disapproved of it. Felix went on, nevertheless, impenetrable to reproof of the silent sort. “Dear little Tommie! So delightfully fat; and such an infernal temper! I don’t know whether I hate him or love him. Where is he?”

“Ill in bed,” answered her ladyship, with a gravity which startled even Felix himself. “I wish to speak to you about Tommie. You know everybody. Do you know of a good dog-doctor? The person I have employed so far doesn’t at all satisfy me.”

“All humbugs, my dear aunt. The worse the dog gets the bigger the bill grows, don’t you see? I have got the man for you—a gentleman. Knows more about horses and dogs than all the veterinary surgeons put together. We met in the boat yesterday crossing the Channel. You know him by name, of course? Lord Rotherfield’s youngest son, Alfred Hardyman.”

“The owner of the stud farm? The man who has bred the famous racehorses?” cried Lady Lydiard. “My dear Felix, how can I presume to trouble such a great personage about my dog?”

Felix burst into his genial laugh. “Never was modesty more woefully out of place,” he rejoined. “Hardyman is dying to be presented to your Ladyship. He has heard, like everybody, of the magnificent decorations of this house, and he is longing to see them. His chambers are close by, in Pall Mall. If he is at home we will have him here in five minutes. Perhaps I had better see the dog first?”

Lady Lydiard shook her head. “Isabel says he had better not be disturbed,” she answered. “Isabel understands him better than anybody.”

Felix lifted his lively eyebrows with a mixed expression of curiosity and surprise. “Who is Isabel?”

Lady Lydiard was vexed with herself for carelessly mentioning Isabel’s name in her nephew’s presence. Felix was not the sort of person whom she was desirous of admitting to her confidence in domestic matters. “Isabel is an addition to my household since you were here last,” she answered shortly.

“Young and pretty?” inquired Felix. “Ah! you look serious, and you don’t answer me. Young and pretty, evidently. Which may I see first, the addition to your household or the addition to your picture-gallery? You look at the picture-gallery—I am answered again.” He rose to approach the archway, and stopped at his first step forward. “A sweet girl is a dreadful responsibility, aunt,” he resumed, with an ironical assumption of gravity. “Do you know, I shouldn’t be surprised if Isabel, in the long run, cost you more than Hobbema. Who is this at the door?”

The person at the door was Robert Moody, returned from the bank. Mr. Felix Sweetsir, being near-sighted, was obliged to fit his eye-glass in position before he could recognize the prime minister of Lady Lydiard’s household.

“Ha! our worthy Moody. How well he wears! Not a gray hair on his head—and look at mine! What dye do you use, Moody? If he had my open disposition he would tell. As it is, he looks unutterable things, and holds his tongue. Ah! if I could only have held my tongue—when I was in the diplomatic service, you know—what a position I might have occupied by this time! Don’t let me interrupt you, Moody, if you have anything to say to Lady Lydiard.”

Having acknowledged Mr. Sweetsir’s lively greeting by a formal bow, and a grave look of wonder which respectfully repelled that vivacious gentleman’s flow of humor, Moody turned towards his mistress.

“Have you got the bank-note?” asked her Ladyship.