The novel revolves around two totally different ladies, both of which happen to be widows. In England, we have Mrs. Wagner, who wants to run the business of her deceased husband and hire more women; she has a philanthropic vein and takes Jack Straw from the Bedlam asylum right into her own house. Then we have Madame Fontaine, whose husband was a scientist and an expert on toxins. She has had monetary problems since the death of Mr. Fontaine, and gets very excited, when her daughter Minna starts to date Fritz Keller, the son of Mrs. Wagner’s business partner … 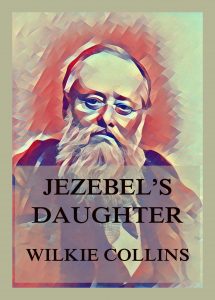 At the end of the week we found the widow waiting to receive us.

To describe her personally, she was a little lady, with a remarkably pretty figure, a clear pale complexion, a broad low forehead, and large, steady, brightly-intelligent gray eyes. Having married a man very much older than herself, she was still (after many years of wedded life) a notably attractive woman. But she never seemed to be conscious of her personal advantages, or vain of the very remarkable abilities which she did unquestionably possess. Under ordinary circumstances, she was a singularly gentle, unobtrusive creature. But let the occasion call for it, and the reserves of resolution in her showed themselves instantly. In all my experience I have never met with such a firm woman, when she was once roused.

She entered on her business with us, wasting no time in preliminary words. Her face showed plain signs, poor soul, of a wakeful and tearful night. But she claimed no indulgence on that account. When she spoke of her dead husband—excepting a slight unsteadiness in her voice—she controlled herself with a courage which was at once pitiable and admirable to see.

“You both know,” she began, “that Mr. Wagner was a man who thought for himself. He had ideas of his duty to his poor and afflicted fellow-creatures which are in advance of received opinions in the world about us. I love and revere his memory—and (please God) I mean to carry out his ideas.”

The lawyer began to look uneasy. “Do you refer, madam, to Mr. Wagner’s political opinions?” he inquired.

Fifty years ago, my old master’s political opinions were considered to be nothing less than revolutionary. In these days—when his Opinions have been sanctioned by Acts of Parliament, with the general approval of the nation—people would have called him a “Moderate Liberal,” and would have set him down as a discreetly deliberate man in the march of modern progress.

“I have nothing to say about politics,” my aunt answered. “I wish to speak to you, in the first place, of my husband’s opinions on the employment of women.”

Here, again, after a lapse of half a century, my master’s heresies of the year 1828 have become the orthodox principles of the year 1878. Thinking the subject over in his own independent way, he had arrived at the conclusion that there were many employments reserved exclusively for men, which might with perfect propriety be also thrown open to capable and deserving women. To recognize the claims of justice was, with a man of Mr. Wagner’s character, to act on his convictions without a moment’s needless delay. Enlarging his London business at the time, he divided the new employments at his disposal impartially between men and women alike. The scandal produced in the city by this daring innovation is remembered to the present day by old men like me. My master’s audacious experiment prospered nevertheless, in spite of scandal.

“If my husband had lived,” my aunt continued, “it was his intention to follow the example, which he has already set in London, in our house at Frankfort. There also our business is increasing, and we mean to add to the number of our clerks. As soon as I am able to exert myself, I shall go to Frankfort, and give German women the same opportunities which my husband has already given to English women in London. I have his notes on the best manner of carrying out this reform to guide me. And I think of sending you, David,” she added, turning to me, “to our partners in Frankfort, Mr. Keller and Mr. Engelman, with instructions which will keep some of the vacant situations in the office open, until I can follow you.” She paused, and looked at the lawyer. “Do you see any objection to what I propose?” she said.

“I see some risks,” he answered, cautiously.

“In London, madam, the late Mr. Wagner had special means of investigating the characters of the women whom he took into his office. It may not be so easy for you, in a strange place like Frankfort, to guard against the danger——” He hesitated, at a loss for the moment to express himself with sufficient plainness and sufficient delicacy.

My aunt made no allowances for his embarrassment.

“Don’t be afraid to speak out, sir,” she said, a little coldly. “What danger are you afraid of?”

“Yours is a generous nature, madam: and generous natures are easily imposed upon. I am afraid of women with bad characters, or, worse still, of other women——”

He stopped again. This time there was a positive interruption. We heard a knock at the door.

Our head-clerk was the person who presented himself at the summons to come in. My aunt held up her hand. “Excuse me, Mr. Hartrey—I will attend to you in one moment.” She turned to the lawyer. “What other women are likely to impose on me?” she asked.

“Women, otherwise worthy of your kindness, who may be associated with disreputable connections,” the lawyer replied. “The very women, if I know anything of your quick sympathies, whom you would be most anxious to help, and who might nevertheless be a source of constant trouble and anxiety, under pernicious influences at home.”

My aunt made no answer. For the moment, the lawyer’s objections seemed to annoy her. She addressed herself to Mr. Hartrey; asking rather abruptly what he had to say to her.

Our head-clerk was a methodical gentleman of the old school. He began by confusedly apologizing for his intrusion; and ended by producing a letter.

“When you are able to attend to business, madam, honor me by reading this letter. And, in the meantime, will you forgive me for taking a liberty in the office, rather than intrude on your grief so soon after the death of my dear and honored master?” The phrases were formal enough; but there was true feeling in the man’s voice as he spoke. My aunt gave him her hand. He kissed it, with the tears in his eyes.

“Whatever you have done has been well done, I am sure,” she said kindly. “Who is the letter from?”

“From Mr. Keller, of Frankfort, madam.”

My aunt instantly took the letter from him, and read it attentively. It has a very serious bearing on passages in the present narrative which are yet to come. I accordingly present a copy of it in this place:

“Dear Mr. Hartrey,—It is impossible for me to address myself to Mrs. Wagner, in the first days of the affliction that has fallen on her. I am troubled by a pressing anxiety; and I venture to write to you, as the person now in charge at our London office.

“My only son Fritz is finishing his education at the university of Wurzburg. He has, I regret to say, formed an attachment to a young woman, the daughter of a doctor at Wurzburg, who has recently died. I believe the girl to be a perfectly reputable and virtuous young person. But her father has not only left her in poverty, he has done worse—he has died in debt. Besides this, her mother’s character does not stand high in the town. It is said, among other things, that her extravagance is mainly answerable for her late husband’s debts. Under these circumstances, I wish to break off the connection while the two young people are separated for the time by the event of the doctor’s recent death. Fritz has given up the idea of entering the medical profession, and has accepted my proposal that he shall succeed me in our business. I have decided on sending him to London, to learn something of commercial affairs, at headquarters, in your office.

“My son obeys me reluctantly; but he is a good and dutiful lad—and he yields to his father’s wishes. You may expect him in a day or two after receipt of these lines. Oblige me by making a little opening for him in one of your official departments, and by keeping him as much as possible under your own eye, until I can venture on communicating directly with Mrs. Wagner—to whom pray convey the expression of my most sincere and respectful sympathy.”

My aunt handed back the letter. “Has the young man arrived yet?” she asked.

“And have you found some employment for him?”

“I have ventured to place him in our corresponding department,” the head-clerk answered. “For the present he will assist in copying letters; and, after business-hours, he will have a room (until further orders) in my house. I hope you think I have done right, madam?”

“You have done admirably, Mr. Hartrey. At the same time, I will relieve you of some of the responsibility. No grief of mine shall interfere with my duty to my husband’s partner. I will speak to the young man myself. Bring him here this evening, after business-hours. And don’t leave us just yet; I want to put a question to you relating to my husband’s affairs, in which I am deeply interested.” Mr. Hartrey returned to his chair. After a momentary hesitation, my aunt put her question in terms which took us all three by surprise.