‘The Black Robe’ combines some aim at psychological analysis with great inventiveness. Mr. Wilkie Collins never writes carelessly; and in this instance he has been especially careful. The great point of the piece is the peculiar mental haunting by a voice of one Romagne, who has killed a man in a duel; and a secondary interest, which is admirably worked out, is the contest between the Church of Rome, as embodied in the person of Father Benwell and Mr. Penrose, and love, as embodied in the person of a Miss Eyrecourt. It is necessary to say that Romagne, in the course of time, has become a man of considerable property, else he could not have the close attention of either party. The Jesuitical scheming of the Romanists and the astute forecast of Miss Eyrecourt are equally well done; and it goes without saying that there are some admirable underplots, with groups of characters, who are all sketched with that kind of decisive completeness which almost makes us doubt of their reality. Mr. Wilkie Collins’s stories, however, do not depend on such tests as these: they are unreal in relation to any other world save that which lies in the mind of the artist; and it is sufficient testimony to his power when we say that if you once begin to read, you must read on; for not only does one incident develop itself out of another, but there is a glamour cast over your saner mind which sometimes makes you question how you could have been so deeply interested as you really are. For around a most conventional ideal world Mr. Wilkie Collins groups so many associations and forms of everyday life-reinforces his improbabilities by the most actual-looking letters and so on-that we are completely taken possession of, and the highest tribute of praise to him is to say that he lays hold of universal springs of interest, though he really ought hardly to do so. 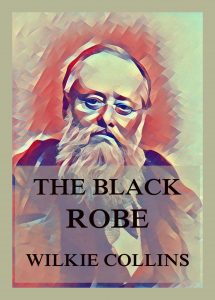 VANGE ABBEY is, I suppose, the most solitary country house in England. If Romayne wanted quiet, it was exactly the place for him.

On the rising ground of one of the wildest moors in the North Riding of Yorkshire, the ruins of the old monastery are visible from all points of the compass. There are traditions of thriving villages clustering about the Abbey, in the days of the monks, and of hostleries devoted to the reception of pilgrims from every part of the Christian world. Not a vestige of these buildings is left. They were deserted by the pious inhabitants, it is said, at the time when Henry the Eighth suppressed the monasteries, and gave the Abbey and the broad lands of Vange to his faithful friend and courtier, Sir Miles Romayne. In the next generation, the son and heir of Sir Miles built the dwelling-house, helping himself liberally from the solid stone walls of the monastery. With some unimportant alterations and repairs, the house stands, defying time and weather, to the present day.

At the last station on the railway the horses were waiting for us. It was a lovely moonlight night, and we shortened the distance considerably by taking the bridle path over the moor. Between nine and ten o’clock we reached the Abbey.

Years had passed since I had last been Romayne’s guest. Nothing, out of the house or in the house, seemed to have undergone any change in the interval. Neither the good North-country butler, nor his buxom Scotch wife, skilled in cookery, looked any older: they received me as if I had left them a day or two since, and had come back again to live in Yorkshire. My well-remembered bedroom was waiting for me; and the matchless old Madeira welcomed us when my host and I met in the inner-hall, which was the ordinary dining-room of the Abbey.

As we faced each other at the well-spread table, I began to hope that the familiar influences of his country home were beginning already to breathe their blessed quiet over the disturbed mind of Romayne. In the presence of his faithful old servants, he seemed to be capable of controlling the morbid remorse that oppressed him. He spoke to them composedly and kindly; he was affectionately glad to see his old friend once more in the old house.

When we were near the end of our meal, something happened that startled me. I had just handed the wine to Romayne, and he had filled his glass—when he suddenly turned pale, and lifted his head like a man whose attention is unexpectedly roused. No person but ourselves was in the room; I was not speaking to him at the time. He looked round suspiciously at the door behind him, leading into the library, and rang the old-fashioned handbell which stood by him on the table. The servant was directed to close the door.

“No.” He reconsidered that brief answer, and contradicted himself. “Yes—the library fire has burned low, I suppose.”

In my position at the table, I had seen the fire: the grate was heaped with blazing coals and wood. I said nothing. The pale change in his face, and his contradictory reply, roused doubts in me which I had hoped never to feel again.

He pushed away his glass of wine, and still kept his eyes fixed on the closed door. His attitude and expression were plainly suggestive of the act of listening. Listening to what?

After an interval, he abruptly addressed me. “Do you call it a quiet night?” he said.

“As quiet as quiet can be,” I replied. “The wind has dropped—and even the fire doesn’t crackle. Perfect stillness indoors and out.”

“Out?” he repeated. For a moment he looked at me intently, as if I had started some new idea in his mind. I asked as lightly as I could if I had said anything to surprise him. Instead of answering me, he sprang to his feet with a cry of terror, and left the room.

I hardly knew what to do. It was impossible, unless he returned immediately to let this extraordinary proceeding pass without notice. After waiting for a few minutes I rang the bell.

The old butler came in. He looked in blank amazement at the empty chair. “Where’s the master?” he asked.

I could only answer that he had left the table suddenly, without a word of explanation. “He may perhaps be ill,” I added. “As his old servant, you can do no harm if you go and look for him. Say that I am waiting here, if he wants me.”

The minutes passed slowly and more slowly. I was left alone for so long a time that I began to feel seriously uneasy. My hand was on the bell again, when there was a knock at the door. I had expected to see the butler. It was the groom who entered the room.

“Garthwaite can’t come down to you, sir,” said the man. “He asks, if you will please go up to the master on the Belvidere.”

The house—extending round three sides of a square—was only two stories high. The flat roof, accessible through a species of hatchway, and still surrounded by its sturdy stone parapet, was called “The Belvidere,” in reference as usual to the fine view which it commanded. Fearing I knew not what, I mounted the ladder which led to the roof. Romayne received me with a harsh outburst of laughter—that saddest false laughter which is true trouble in disguise.

“Here’s something to amuse you!” he cried. “I believe old Garthwaite thinks I am drunk—he won’t leave me up here by myself.”

Letting this strange assertion remain unanswered, the butler withdrew. As he passed me on his way to the ladder, he whispered: “Be careful of the master! I tell you, sir, he has a bee in his bonnet this night.”

Although not of the north country myself, I knew the meaning of the phrase. Garthwaite suspected that the master was nothing less than mad!

Romayne took my arm when we were alone—we walked slowly from end to end of the Belvidere. The moon was, by this time, low in the heavens; but her mild mysterious light still streamed over the roof of the house and the high heathy ground round it. I looked attentively at Romayne. He was deadly pale; his hand shook as it rested on my arm—and that was all. Neither in look nor manner did he betray the faintest sign of mental derangement. He had perhaps needlessly alarmed the faithful old servant by something that he had said or done. I determined to clear up that doubt immediately.

“You left the table very suddenly,” I said. “Did you feel ill?”

“Not ill,” he replied. “I was frightened. Look at me—I’m frightened still.”

Instead of answering, he repeated the strange question which he had put to me downstairs.

“Do you call it a quiet night?”

Considering the time of year, and the exposed situation of the house, the night was almost preternaturally quiet. Throughout the vast open country all round us, not even a breath of air could be heard. The night-birds were away, or were silent at the time. But one sound was audible, when we stood still and listened—the cool quiet bubble of a little stream, lost to view in the valley-ground to the south.

“I have told you already,” I said. “So still a night I never remember on this Yorkshire moor.”

He laid one hand heavily on my shoulder. “What did the poor boy say of me, whose brother I killed?” he asked. “What words did we hear through the dripping darkness of the mist?”

“I won’t encourage you to think of them. I refuse to repeat the words.”

He pointed over the northward parapet.

“It doesn’t matter whether you accept or refuse,” he said, “I hear the boy at this moment—there!”

He repeated the horrid words—marking the pauses in the utterance of them with his finger, as if they were sounds that he heard:

“Assassin! Assassin! where are you?”

“Good God!” I cried. “You don’t mean that you really hear the voice?”

“Do you hear what I say? I hear the boy as plainly as you hear me. The voice screams at me through the clear moonlight, as it screamed at me through the sea-fog. Again and again. It’s all round the house. That way now, where the light just touches on the tops of the heather. Tell the servants to have the horses ready the first thing in the morning. We leave Vange Abbey to-morrow.”

These were wild words. If he had spoken them wildly, I might have shared the butler’s conclusion that his mind was deranged. There was no undue vehemence in his voice or his manner. He spoke with a melancholy resignation—he seemed like a prisoner submitting to a sentence that he had deserved. Remembering the cases of men suffering from nervous disease who had been haunted by apparitions, I asked if he saw any imaginary figure under the form of a boy.

“I see nothing,” he said; “I only hear. Look yourself. It is in the last degree improbable—but let us make sure that nobody has followed me from Boulogne, and is playing me a trick.”

We made the circuit of the Belvidere. On its eastward side the house wall was built against one of the towers of the old Abbey. On the westward side, the ground sloped steeply down to a deep pool or tarn. Northward and southward, there was nothing to be seen but the open moor. Look where I might, with the moonlight to make the view plain to me, the solitude was as void of any living creature as if we had been surrounded by the awful dead world of the moon.

“Was it the boy’s voice that you heard on the voyage across the Channel?” I asked.