This book makes no claim to literary merit. It is simply a work of research and documentation, giving evidence and facts which will help the reader in drawing his own conclusions. The book is not complete simply because it will never be complete. But for the present it is the best study of the root conditions which have led to present day subversive upheavals and the overthrow of the principles of Christian civilization. The book is a fascinating journey into the various occult traditions from the 16th century to the early 20th century and reveals secrets that have long been hidden. The author died under very mysterious circumstances and has taken much of the secrets with her into the grave. Did she find out too much? If you want to know everything about secret societies and conspiratory brotherhoods, this is yours. Be prepared for knowledge that reaches far beyond your current imagination. 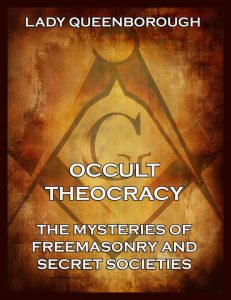 Ritual and Symbolism in Freemasonry (from wikipedia.com)

Freemasonry describes itself as a “‘beautiful system of morality, veiled in allegory and illustrated by symbols”. The symbolism is mainly, but not exclusively, drawn from the manual tools of stonemasons – the square and compasses, the level and plumb rule, the trowel, among others. A moral lesson is attached to each of these tools, although the assignment is by no means consistent. The meaning of the symbolism is taught and explored through ritual.

All Freemasons begin their journey in the “craft” by being progressively initiated, passed and raised into the three degrees of Craft, or Blue Lodge Masonry. During these three rituals, the candidate is progressively taught the meanings of the Lodge symbols, and entrusted with grips, signs and words to signify to other Masons that he has been so initiated. The initiations are part allegory and part lecture, and revolve around the construction of the Temple of Solomon, and the artistry and death of his chief architect, Hiram Abiff. The degrees are those of Entered apprentice, Fellowcraft and Master Mason. While many different versions of these rituals exist, with at least two different lodge layouts and versions of the Hiram myth, each version is recognisable to any Freemason from any jurisdiction.

In some jurisdictions, the main themes of each degree are illustrated by tracing boards. These painted depictions of Masonic themes are exhibited in the lodge according to which degree is being worked, and are explained to the candidate to illustrate the legend and symbolism of each degree.

The idea of Masonic brotherhood probably descends from a 16th-century legal definition of a brother as one who has taken an oath of mutual support to another. Accordingly, Masons swear at each degree to keep the contents of that degree secret, and to support and protect their brethren unless they have broken the law. In most Lodges the oath or obligation is taken on a Volume of Sacred Law, whichever book of divine revelation is appropriate to the religious beliefs of the individual brother (usually the Bible in the Anglo-American tradition). In Progressive continental Freemasonry, books other than scripture are permissible, a cause of rupture between Grand Lodges.