The Heidelberg Catechism is a Protestant confessional document taking the form of a series of questions and answers. It is commonly used in teaching Reformed Christian doctrine and is widely regarded as one of the most influential of the Reformed catechisms. The Catechism is divided into fifty-two sections, called “Lord’s Days,” which were designed to be taught on each of the 52 Sundays of the year. The Synod of Heidelberg approved the catechism in 1563. 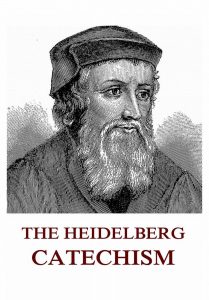 History of the Heidelberg Catechism (from wikipedia)

Elector Frederick III, sovereign of the Electoral Palatinate from 1559 to 1576, commissioned the composition of a new Catechism for his territory. While the catechism’s introduction credits the “entire theological faculty here” (at the University of Heidelberg) and “all the superintendents and prominent servants of the church” for the composition of the catechism, Zacharius Ursinus (1534-1583) is commonly regarded as the catechism’s principal author. Caspar Olevianus (1536–1587) was formerly asserted as a co-author of the document, though this theory has been largely discarded by modern scholarship. Johann Sylvan, Adam Neuser, Johannes Willing, Thomas Erastus, Michael Diller, Johannes Brunner, Tilemann Mumius, Petrus Macheropoeus, Johannes Eisenmenger, Immanuel Tremellius and Pierre Boquin are all likely to have contributed to the Catechism in some way. Frederick himself wrote the preface to the Catechism and closely oversaw its composition and publication.

Frederick, who was officially Lutheran but had strong Reformed leanings, wanted to even out the religious situation of his highly Lutheran territory within the primarily Catholic Holy Roman Empire. The Council of Trent had just finished its work with its conclusions and decrees against the Protestant faiths, and the Peace of Augsburg had only granted toleration for Lutheranism within the empire where the ruler was Lutheran. One of the aims of the catechism was to counteract the teachings of the Roman Catholic Church as well as Anabaptists and “strict” Gnesio-Lutherans like Tilemann Heshusius and Matthias Flacius, who were resisting Frederick’s Reformed influences, particularly on the matter of the Eucharist.

The Catechism based each of its statements on biblical source texts (although some may call them “proof-texts” which can have a negative connotation). Frederick himself defended it at the 1566 Diet of Augsburg as based in scripture rather than based in reformed theology when he was called to answer to charges of violating the Peace of Augsburg.

The Catechism is divided into fifty-two sections, called “Lord’s Days,” which were designed to be taught on each of the 52 Sundays of the year. A synod in Heidelberg approved the catechism in 1563. In the Netherlands, the Catechism was approved by the Synods of Wesel (1568), Emden (1571), Dort (1578), the Hague (1586), as well as the great Synod of Dort of 1618-1619, which adopted it as one of the Three Forms of Unity, together with the Belgic Confession and the Canons of Dort. Elders and deacons were required to subscribe and adhere to it, and ministers were required to preach on a section of the Catechism each Sunday so as to increase the often poor theological knowledge of the church members. In many Dutch Reformed denominations this practice is still continued.