Politics is Aristotle’s most known work on political philosophy. The treatise is the logical sequel to the Nicomachean Ethics, as both works deal with the “philosophy of human affairs.” The whole treatise consists of eight books and chapters about constitutions, democracy, oligarchy, citizenships, states and political theories. 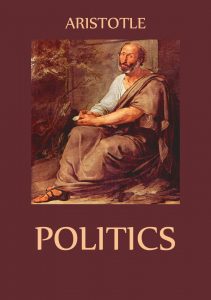 Composition of the book (from Wikipedia):

The literary character of the Politics is subject to some dispute, growing out of the textual difficulties that attended the loss of Aristotle’s works. Book III ends with a sentence that is repeated almost verbatim at the start of Book VII, while the intervening Books IV–VI seem to have a very different flavor from the rest; Book IV seems to refer several times back to the discussion of the best regime contained in Books VII–VIII. Some editors have therefore inserted Books VII–VIII after Book III. At the same time, however, references to the “discourses on politics” that occur in the Nicomachean Ethics suggest that the treatise as a whole ought to conclude with the discussion of education that occurs in Book VIII of the Politics, although it is not certain that Aristotle is referring to the Politics here.

Werner Jaeger suggested that the Politics actually represents the conflation of two, distinct treatises. The first (Books I–III, VII–VIII) would represent a less mature work from when Aristotle had not yet fully broken from Plato, and consequently show a greater emphasis on the best regime. The second (Books IV–VI) would be more empirically minded, and thus belong to a later stage of development.

Carnes Lord has argued against the sufficiency of this view, however, noting the numerous cross-references between Jaeger’s supposedly separate works and questioning the difference in tone that Jaeger saw between them. For example, Book IV explicitly notes the utility of examining actual regimes (Jaeger’s “empirical” focus) in determining the best regime (Jaeger’s “Platonic” focus). Instead, Lord suggests that the Politics is indeed a finished treatise, and that Books VII and VIII do belong in between Books III and IV; he attributes their current ordering to a merely mechanical transcription error.