The Nicomachean Ethics is Aristotle’s best-known work on this subject. It consists of ten books and is based on notes from his lectures at the Lyceum. The theme of the work is the Socratic question of how men should best live. Before Socrates, philosophy was merely theoretical. This changed dramatically with Aristotle’s works, which bind philosophy to human issues. The Nicomachean Ethics are therefore practical rather than theoretical, in the original Aristotelian senses of these terms. 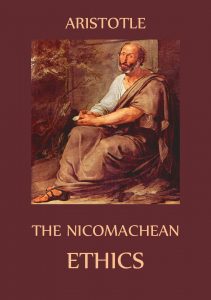 Further information on this book (from Wikipedia):

The Nicomachean Ethics is the name normally given to Aristotle’s best-known work on ethics. The work, which plays a pre-eminent role in defining Aristotelian ethics, consists of ten books, originally separate scrolls, and is understood to be based on notes from his lectures at the Lyceum. The title is often assumed to refer to his son Nicomachus, to whom the work was dedicated or who may have edited it (although his young age makes this less likely). Alternatively, the work may have been dedicated to his father, who was also called Nicomachus.

The theme of the work is a Socratic question previously explored in the works of Plato, Aristotle’s friend and teacher, of how men should best live. In his Metaphysics, Aristotle described how Socrates, the friend and teacher of Plato, had turned philosophy to human questions, whereas Pre-Socratic philosophy had only been theoretical. Ethics, as now separated out for discussion by Aristotle, is practical rather than theoretical, in the original Aristotelian senses of these terms. In other words, it is not only a contemplation about good living, because it also aims to create good living. It is therefore connected to Aristotle’s other practical work, the Politics, which similarly aims at people becoming good. Ethics is about how individuals should best live, while the study of politics is from the perspective of a law-giver, looking at the good of a whole community.

The Nicomachean Ethics is widely considered one of the most important historical philosophical works, and had an important impact upon the European Middle Ages, becoming one of the core works of medieval philosophy. It therefore indirectly became critical in the development of all modern philosophy as well as European law and theology. Many parts of the Nicomachean Ethics are well known in their own right, within different fields. In the Middle Ages, a synthesis between Aristotelian ethics and Christian theology became widespread, in Europe as introduced by Albertus Magnus. While various philosophers had influenced Christendom since its earliest times, in Western Europe Aristotle became “the Philosopher”, partly inspired by the Spanish Muslim philosopher Averroes. The most important version of this synthesis was that of Thomas Aquinas. Other more “Averroist” Aristotelians such as Marsilius of Padua were controversial but also influential. (Marsilius is for example sometimes said to have influenced the controversial English political reformer Thomas Cromwell.) A critical period in the history of this work’s influence is at the end of the Middle Ages, and beginning of modernity, when several authors such as Francis Bacon and Thomas Hobbes, argued forcefully and largely successfully that the medieval Aristotelian tradition in practical thinking had become a great impediment to philosophy in their time. However, in more recent generations, Aristotle’s original works (if not those of his medieval followers) have once again become an important source.