The Constitution of Athens

The Constitution of Athens – Aristotle

The Constitution of Athens is a thorough description of the political system of that ancient state. The treatise was composed between 330 and 322 BC and consists of two parts. The first part deals with the different forms of the constitution, the second part describes the city’s institutions, including the terms of access to citizenship, magistrates and the courts. 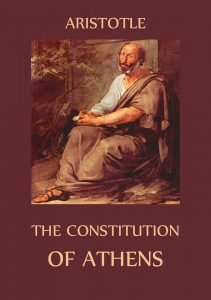 The Constitution of Athens

The Constitution of Athens.

Discovery of the text (from Wikipedia):

The Aristotelian text is unique, because it is not a part of the Corpus Aristotelicum. It was lost until two leaves of a papyrus codex carrying part of the text were discovered in Oxyrhynchus, Egypt in 1879 and published in 1880. A second, more extensive papyrus text was purchased in Egypt by an American missionary in 1890. E. A. Wallis Budge of the British Museum acquired it later that year, and the first edition of it by Frederic G. Kenyon was published in January, 1891. The editions of the Greek text in widest use today are Kenyon’s Oxford Classical Text of 1920 and the Teubner edition by Mortimer H. Chambers (1986, second edition 1994). The papyrus text is now held in the British Library.

Ancient accounts of Aristotle credit him with 170 Constitutions of various states; it is widely assumed that these were research for the Politics, and that many of them were written or drafted by his students. Athens, however, was a particularly important state, and where Aristotle was living at the time, therefore it is plausible that, even if students composed the others, Aristotle had composed that one himself as a model for the rest. On the other hand, a number of prominent scholars doubt that it was written by Aristotle.

If it is a genuine writing of Aristotle, then it is of particular significance, because it is the only one of his extant writings that was actually intended for publication.

Because it purports to supply us with so much contemporary information previously unknown or unreliable, modern historians have claimed that “the discovery of this treatise constitutes almost a new epoch in Greek historical study.” In particular, 21–22, 26.2–4, and 39–40 of the work contain factual information not found in any other extant ancient text.