The Organon is another name for the standard collection of Aristotle’s six works on logic. They still belong to the most significant works on this subject and were highly influential throughout history for many philosophical tendencies, especially the Scholastics. This is the complete edition with all six works. 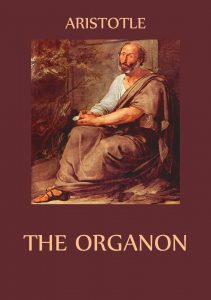 Influence of the Organon (from Wikipedia):

The Organon was used in the school founded by Aristotle at the Lyceum, and some parts of the works seem to be a scheme of a lecture on logic. So much so that after Aristotle’s death, his publishers (Andronicus of Rhodes in 50 BC, for example) collected these works.

Following the collapse of the Western Roman Empire in the fifth century, much of Aristotle’s work was lost in the Latin West. The Categories and On Interpretation are the only significant logical works that were available in the early Middle Ages. These had been translated into Latin by Boethius. The other logical works were not available in Western Christendom until translated to Latin in the 12th century. However, the original Greek texts had been preserved in the Greek-speaking lands of the Eastern Roman Empire (aka Byzantium). In the mid-twelfth century, James of Venice translated into Latin the Posterior Analytics from Greek manuscripts found in Constantinople.

The books of Aristotle were available in the early Arab Empire, and after 750 AD Muslims had most of them, including the Organon, translated into Arabic, sometimes via earlier Syriac translations. They were studied by Islamic and Jewish scholars, including Rabbi Moses Maimonides (1135–1204) and the Muslim Judge Ibn Rushd, known in the West as Averroes (1126–1198); both were originally from Cordoba, Spain, although the former left Iberia and by 1168 lived in Egypt.

In the Enlightenment there was a revival of interest in logic as the basis of rational enquiry, and a number of texts, most successfully the Port-Royal Logic, polished Aristotelian term logic for pedagogy. During this period, while the logic certainly was based on that of Aristotle, Aristotle’s writings themselves were less often the basis of study. There was a tendency in this period to regard the logical systems of the day to be complete, which in turn no doubt stifled innovation in this area. However Francis Bacon published his Novum Organum (“The New Organon”) as a scathing attack in 1620. Immanuel Kant thought that there was nothing else to invent after the work of Aristotle, and the famous logic historian Karl von Prantl claimed that any logician who said anything new about logic was “confused, stupid or perverse.” These examples illustrate the force of influence which Aristotle’s works on logic had. Indeed, he had already become known by the Scholastics (medieval Christian scholars) as “The Philosopher”, due to the influence he had upon medieval theology and philosophy. His influence continued into the Early Modern period and Organon was the basis of school philosophy even in the beginning of 18th century. Since the logical innovations of the 19th century, particularly the formulation of modern predicate logic, Aristotelian logic had for a time fallen out of favor among many analytic philosophers.

However the logic historian John Corcoran and others have shown that the works of George Boole and Gottlob Frege—which laid the groundwork for modern mathematical logic—each represent a continuation and extension to Aristote’s logic and in no way contradict or displace it.  Boole fully accepted and endorsed Aristotle’s logic, and Frege included Aristotle’s square of opposition at the end of his groundbreaking Begriffsschrift to show the harmony of his theory with the Aristotelian tradition.