To say nothing of the supreme excellence of the dialogue, there is scarcely a page but has its little gem of exact and polished phrasing; scarcely a chapter which is not neatly opened or artistically ended ; while the whole book abounds in sentences over which the writer, it is plain, must have lingered with patient and loving craftsmanship. . . . Criticism has found little to condemn in the details of this capital novel.- Austin Dobson

Never was there a book written which has given more harmless pleasure to those who have come under its spell. As we open its pages, we bid adieu to a world of sordid cares and troublesome interests, and though we do not wander into fairy-land, for Miss Austen’s world is always matter-of-fact, we do catch a breath of an air less severe than that which we habitually draw, and find, if not fairy-land, at least a touch of the lightness of fairy-land brought down to us. – Adolphus Alfred Jack.

“Pride and Prejudice” is realistic in its narrowness of scope, in its lack of complicated plot, and in that it sets forth clearly and fully a limited section of life. It attempts to hold up no ideals ; it deals for the most part with middle-class people ; it has in it no literary atmosphere suggested either by the characters or by the apthor’s allusions. And yet one forgets that he is reading a book ; he feels as if he were making a visit among people in whom he had a human interest. He finds himself scheming with the fond mother in her matchmaking interests for her daughters five.- Charity Dye. 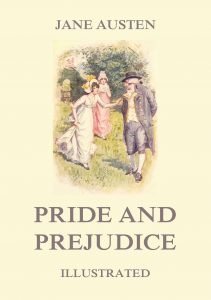 Summary of Pride and Prejudice (from Wikipedia):

The novel opens with Mrs Bennet trying to persuade Mr Bennet to visit an eligible bachelor, Mr Bingley, who has arrived in the neighborhood. After some verbal sparring with Mr Bennet baiting his wife, it transpires that this visit has taken place at Netherfield (Mr Bingley’s rented house). The visit is followed by an invitation to a ball at the local assembly rooms that the whole neighborhood will attend.

At the ball, Mr Bingley is open and cheerful, popular with all the guests, and appears to be very attracted to the beautiful Miss Bennet. His friend, Mr Darcy, is reputed to be twice as wealthy; however, he is haughty and aloof. He declines to dance with Elizabeth suggesting that she is not pretty enough to tempt him. She finds this amusing and jokes about the statement with her friends. Miss Jane Bennet also attracts the attention of Mr Bingley’s sister Caroline, who invites her to visit.

Jane visits Miss Bingley and is caught in a rain shower on the way, catching a serious cold. Elizabeth, out of genuine concern for her sister’s well being, visits her sister there. This is the point at which Darcy begins to see the attraction of Elizabeth, and Miss Bingley is shown to be jealous of Elizabeth since she wants to marry Darcy herself.

Mr Collins, a cousin of Mr Bennet and heir to the Longbourn estate, visits the Bennet family. He is a pompous and obsequious clergyman because he expects each of the Bennet girls to wish to marry him due to his inheritance. He plans to propose to Elizabeth over Jane as he is led to believe Jane is taken.

Elizabeth and her family meet the dashing and charming Mr Wickham who singles out Elizabeth and tells her a story of the hardship that Mr Darcy has caused him by depriving him of a living (position as clergyman in a prosperous parish with good revenue that once granted, is for life) promised to him by Mr Darcy’s late father. Elizabeth’s dislike of Mr Darcy is confirmed.

At a ball at which Mr Wickham is not present, Elizabeth dances with Mr Darcy rather against her will. Other than Jane and Elizabeth, all the members of the Bennet family show their lack of decorum. Mrs Bennet states loudly that she expects Jane and Bingley to become engaged and each member of the family exposes the whole to ridicule.

The following morning, Mr Collins proposes to Elizabeth. She rejects him to the fury of her mother and the relief of her father. They receive news that the Bingleys are leaving for London, and that Mr Collins has proposed to Charlotte Lucas, a sensible lady and Elizabeth’s friend. She is slightly older and is grateful to receive a proposal that will guarantee her a home. Elizabeth is aghast at such pragmatism in matters of love.

Jane goes to visit her Aunt and Uncle Gardiner at an unfashionable address in London. Miss Bingley clearly does not want to continue the friendship and Jane is upset though very composed.

In the spring, Elizabeth visits Charlotte and Mr Collins in Kent. Elizabeth and her hosts are frequently invited to Rosings Park, the imposing home of Lady Catherine de Bourgh. Lady Catherine is Mr Darcy’s aunt and extremely wealthy. She expects Mr Darcy to marry her daughter. Mr Darcy and his cousin, Colonel FitzWilliam, visit Lady Catherine. Colonel FitzWilliam tells Elizabeth how Mr Darcy managed to save a friend from a bad match by convincing the friend of the lady’s indifference. Elizabeth is horrified at Darcy’s involvement in an affair which has caused her sister so much pain. Mr Darcy, however, has fallen in love with Elizabeth and proposes to her. She rejects him, stating that she could not love a man who has caused her sister such unhappiness, and accuses him of treating Mr Wickham unjustly. Mr Darcy accuses her family of wanting propriety and suggests he has been kinder to Bingley than himself. Both are furious and they part barely speaking.

The following morning, Mr Darcy gives Elizabeth a letter that explains that his treatment of Mr Wickham was caused by the fact that Mr Wickham refused the Living and was compensated economically, but then proceeded to waste all the money and then, impoverished, demanded the Living again with threats. After being refused, he tried to elope with Darcy’s 15-year-old sister Georgiana for her great dowry, as Colonel FitzWilliam could also attest. He also claimed that he believed that Miss Bennet who, despite her amiability, is actually a bit reserved, did not love Mr Bingley. Darcy apologises for hurting Jane and Elizabeth begins to rejudge Mr Darcy on a clearer basis.

Some months later, Elizabeth and her Aunt and Uncle Gardiner visit Darcy’s estate in Derbyshire, Pemberley. While there Elizabeth hears an account of him from the housekeeper as being kind and generous. When Mr Darcy returns unexpectedly, he is overwhelmingly kind and civil and invites Elizabeth and the Gardiner’s to meet his sister and go fishing. Elizabeth is surprised and delighted by the kindness to herself and her aunt and uncle. However, she suddenly has news from Longbourn that her sister Lydia had eloped with Mr Wickham. She tells Mr Darcy immediately and departs in haste, believing she will never see him again as Lydia’s disgrace would ruin the family’s good name.

After an agonizing wait, Mr Wickham is persuaded to marry Lydia with only the payment of debts required. With some degree of decency restored, Lydia visits Elizabeth and tells her that Mr Darcy was at the wedding. Mrs Gardiner informs Elizabeth that it is Mr Darcy who has made the match and hints that he may have a motive for doing so.

At this point, Mr Bingley and Mr Darcy return to Netherfield. Bingley proposes to Jane and is accepted, much to the delight of all. Lady Catherine visits Elizabeth under the impression that she is going to marry Mr Darcy, Elizabeth refuses to deny this claim and Lady Catherine leaves outraged by her perceived insolence. Darcy and Elizabeth go for a walk together and they become engaged. Elizabeth then has to convince her father that she is not marrying for money, and it is only after she speaks about Mr Darcy’s true worth that he is happy about the wedding.