Samuel F. Black provides an overview of the history of San Diego County from the earliest days till the early 20th century. He reflects on the history of Lower California, the settlement of San Diego, the times of St. Francis and Alonzo E. Horton, the evolution of railroads and streets and many more topics. 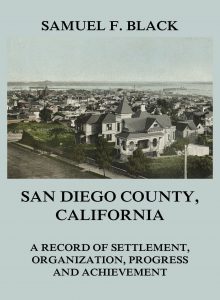