Second String, by Anthony Hope,brings to mind a new tendency in British fiction which has quite been creeping in during the last years of the 19th century; namely, the tendency to concern itself more and more with the social life of middle class people rather than the upper circles. Second String deals with the extremely mixed society of a small English town, in which the hero, Andy Hayes, upon returning home after some years in the Canadian lumber district, finds it somewhat embarrassing to steer successfully between the distinctly “high-life” people on his father’s side of the house and Jack Rock, the village butcher, with whom he is connected through his mother’s second marriage. There is nothing of great importance in the main thread of the story; it is a tranquil chronicle of how Vivian Welgood, a frail, timid sort of girl, while engaging herself to another man, discovers that there is something in the physical presence of strong, big Andy Hayes that gives her a certain borrowed courage and self-reliance. And of courseit is no surprise to the reader when the other man finally elopes with Vivian’s hired companion that she promptly and indeed gladly turns to Andy as second string. The value of the book lies in the deft portrayal of present-day manners, and as such, slight and modest as it is, it rings true. 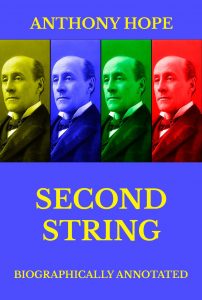