Although among his more recent writings, the author of The Dolly Dialogues has done some rather serious and careful work, there is no exaggeration in saying that in literarv technique and human interest and the various other qualities that go to make good fiction The Great Miss Driver is easily the biggest, best rounded, and altogether worthiest story he has ever written, and yet, the first thing you are apt to think of is that the germ idea of the story goes straight back to the Dolly Dialogues; that in a superficial way, yes and perhaps in a deeper way, too, there is a certain rather absurd similarity between them; just as though the author, having once made a pleasant little comedy out of a certain situation, had ever since been turning over in his mind the possibility of using it in a bigger and more serious way, until eventually he evolved the present volume. Not that Jennie Driver, heiress to Breysgate Priory, bears any close resemblance to Lady Mickleham beyond the very feminine desire for conquest,—any more than the Air. Austin of the one story is a close relative of Mr. Carter in the other. The resemblance lies in this, that both stories are told in the first person by the man who in his secret heart loves the woman of whom he writes, but knows that because he is poor, because he has the natural instinct of an old bachelor, because, also, she has given her heart elsewhere he must remain content to look upon her joys and sorrows in the capacity of a friend, and not that of a lover. 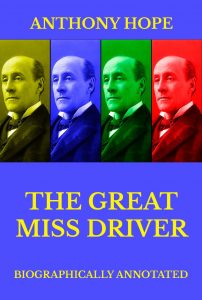