For clever dialogue and spirited situations Anthony Hope is eminently satisfactory. “Helena’s Path” contains both these characteristics, and much beside; a keen appreciation of humorous values and a delightful emotional restraint. Helena’s path is the bone of contention between Helena and the English earl whose estate joins hers. It is a sparkling comedy from cover to cover. Helena’s beauty and the earl’s wit make a good combination when it comes to open war, as it does. 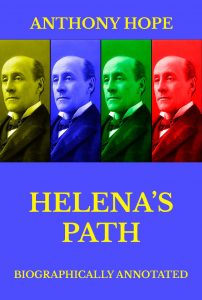