Kravonia is a principality to be sought on the map somewhere in the vicinity of Zenda, and is, like most of the states of the mythical group to which it belongs, the sport of diplomatic intrigue. Its prince is sorely beset by enemies, but when he acquires a princess, in the shape of a beautiful English maiden-transformed from a lowly maid-servant into a captivating adventuress his fortunes change, and he gives his foes a run for their money. Unhappily, he is killed just when triumph is at hand, and his princess goes into exile cherishing the memory of the glorious weeks of the conﬂict. Mr. Hope’s hand has lost little of its cunning since the days when he invented Zenda, and his “Sophy of Kravonia” is a capital story. 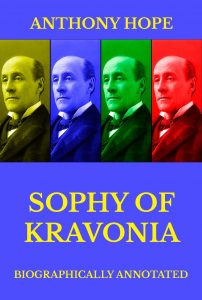