A Servant of the Public

A Servant of the Public – Anthony Hope

It is easy to be enthusiastic about the story. It is psychologic—but with a difference, the difference being the bright and compelling interest of Mr. Hope’s dialogue, and the smiling sanity of his spirit. Imagine much that is best in Meredith or James, and all that is best in Anthony Hope, and you have a fair idea of ‘ A Servant of the Public’. It is not the conventional story of the stage, with glib talk of the greenroom, and intimate glimpses ‘behind the footlights.’ It is the story of an actress off, rather than on, the stage—an analysis of the theatrical, perhaps ‘artistic’ temperament. 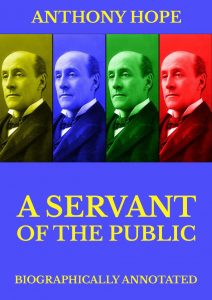 A Servant of the Public

A Servant of the Public.