Imagine Mrs. Burnett saying to herself: “I think I will rewrite Little Lord Fauntleroy for grown-up readers, but instead of having him the carefully nurtured son of a refined and loving mother, he shall have had the harsher training of Dick the bootblack, a product of the New York streets.” Whether consciously or not, that at all events is precisely what Mrs. Burnett has done in T. Tembarom, which mysterious and cryptic name is simply a convenient abbreviation of the hero’s more aristocratic appellation of Temple Temple Barholm. A young man of twenty odd years, who has slept in cellars and barrels, has roughed it from the days of his earliest remembrance and fought his way to a position as editor of the Harlem social page on a New York daily paper; a young man whose ignorance of history, geography, and practically everything which most educated persons are expected to know is monumental,—such a man offers a chance for curious and amusing contrasts on a far larger scale than a small boy like Little Lord Fauntleroy, when suddenly injected into the utterly foreign environment of British aristocracy. 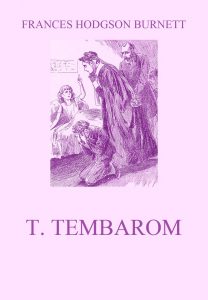