A Complete Manual of the Great Oriental Yogi System of Physical Weil-Being Health Strength and Vigor. It Preaches a Sane, Normal, Simple Theory of Physical Health, and tells how to put the theory into practice. It teaches that the Body is the Temple of the Soul, and should be kept clean and in good order. Its keynote is the healthy Man and Woman. Its purpose, the instruction and mankind to conform to the standard of that healthy man or woman. 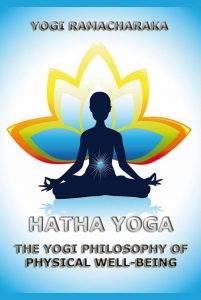 What is Hatha Yoga? (from Wikipedia):

Hatha yoga is a branch of yoga that emphasizes physical exercises to master the body along with mind exercises to withdraw it from external objects. The word haṭha literally means “force” in Sanskrit, and may have this association because the early Indians believed that its practice was challenging and “forced its results to happen” on the yogi. The term “Hatha yoga” connotes a system of supplementary physical techniques within the broader concept of Yoga.

The Hatha yoga origins have been credited by some scholars to the Nath yogi tradition of Shaivism, particularly to Gorakhnath. However, according to James Mallinson, Hatha yoga has more ancient roots and the oldest known twenty texts on Hatha yoga suggest this attribution to the Naths is incorrect. Hatha yoga was a broad movement that developed over a range of sectarian yoga traditions in India, one that was available to all and in some formulations and could be practiced by the householders (grihastha). Important innovations in Hatha yoga, for example, are associated with the Dashanami Sampradaya and the mystical figure of Dattatreya.

The Hatha yoga practice emphasizes proper diet, processes to internally purify the body, proper breathing and its regulation particularly during the yoga practice, and the exercise routine consisting of asanas (bodily postures). The methodology sometimes includes sequences such as the Surya Namaskara, or “salute to the sun”, which consists of several asanas performed as a fluid movement sequence.

The aims of Hatha yoga have traditionally been the same as those of other varieties of yoga. They include physical siddhis (special powers or bodily benefits such as slowing age effects) and spiritual liberation (moksha, mukti). In the 20th century, techniques of Hatha yoga particularly the asanas (physical postures) became popular throughout the world as a form of physical exercise for relaxation, body flexibility, strength and personal concentration. It is now colloquially termed as simply “yoga”. It has also developed into new movements and styles, such as the Iyengar Yoga, but these are not same as the traditional Hatha yoga.