The Fable of the Bees – Bernard de Mandeville

Mandeville’s philosophy gave great offence at the time, and has always been stigmatized as false, cynical and degrading. His main thesis is that the actions of men cannot be divided into lower and higher. In the Fable he shows a society possessed of all the virtues “blest with content and honesty,” falling into apathy and utterly paralyzed. The absence of self-love is the death of progress. The so-called higher virtues are mere hypocrisy, and arise from the selfish desire to be superior to the brutes. He endeavours to show that all social laws are the crystallized results of selfish aggrandizement and protective alliances among the weak. 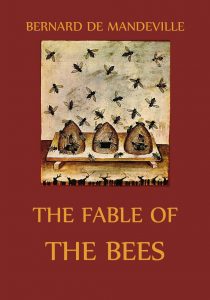 Biography of Bernard Mandeville (from Wikipedia):

Mandeville was born on 15 November 1670, at Rotterdam in the Netherlands, where his father was a prominent physician. On leaving the Erasmus school at Rotterdam he showed his ability by an Oratio scholastica de medicina (1685), and at Leiden University in 1689 he produced the thesis De brutorum operationibus, in which he advocated the Cartesian theory of automatism among animals. In 1691 he took his medical degree, pronouncing an inaugural disputation, De chylosi vitiata. He moved to England to learn the language, and succeeded so remarkably that many refused to believe he was a foreigner. His father had been banished from Rotterdam in 1693 for involvement in the Costerman tax riots on 5 October 1690; Bernard himself may well have been involved.

As a physician Mandeville was well respected and his literary works were successful as well. His conversational abilities won him the friendship of Lord Macclesfield (chief justice 1710–1718), who introduced him to Joseph Addison, described by Mandeville as “a parson in a tye-wig.” He died of influenza on 21 January 1733 at Hackney, aged 62.

There is a surviving image of Mandeville but many details of his life still have to be researched. Although the name Mandeville suggests a French origin, his ancestors had lived in the Netherlands since at least the 16th century. There is no known connection between him and the 14th century Sir John Mandeville.