Tales of Pirates and Blue Water

This volume contains twelve of Conan Doyle’s best stories, the first part “Tales of Pirates” dealing with corsairs and adventurers, the second part “Tales of Blue Water” with sea stories. Included are:

How The Governor Of Saint Kitt’s Came Home
The Dealings Of Captain Sharkey
The Blighting Of Sharkey
How Copley Banks Slew Captain Sharkey
The “Slapping Sal”
A Pirate Of The Land – One Crowded Hour
The Striped Chest
The Captain Of The “Polestar”
The Fiend Of The Cooperage
Jelland’s Voyage
J. Habakuk Jephson’s Statement
That Little Square Box 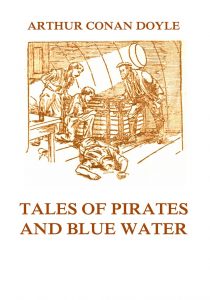 Tales of Pirates and Blue Water

Tales of Pirates and Blue Water.