The Acts of the Apostles

The Acts of the Apostles – Ellen Gould White

The fifth book of the New Testament has been known from ancient times as The Acts of the Apostles; but this title cannot be found in the book itself. One of the earliest manuscripts, the Codex Sinaiticus, gives as the title the simple word Acts, with no mention of the apostles. There is a reason for this. Acts was intended to be more than a brief history of the service rendered by the twelve disciples, much more than the principal events in the lifework of its four leading characters, Peter, James, John, and Paul. The Acts of the Apostles was one of the last books written by Ellen G. White. It was published a few years before her death. It is one of the most illuminating volumes that came from her prolific pen. The average reader will find in it light for Christian witnessing. The message of the book is up to date, and its relevancy is reflected in the effort of the author to show that the twentieth century will witness a bestowal of spiritual power exceeding that of Pentecost. The work of the gospel is not to close with a lesser display of the Holy Spirit’s power than marked its beginning. 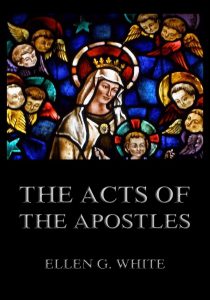 The Acts of the Apostles

The Acts of the Apostles.