Diary of A Tour in Greece, Turkey, Egypt, and The Holy Land

Diary of A Tour in Greece, Turkey, Egypt, and The Holy Land – Mary G. Damer

That women of fashion should travel further than the magasins of Paris, or the cameo-shops of Rome, is meritorious: that they should keep journals while on their travels is industrious and creditable, but that they should publish the said journals is somewhat supererogatory. Mrs. Dawson Damer, however, pleads charity as her excuse for adding to the stock of pink-parasol literature; and really she is so unaffected and good-humoured, so free from affectation and factitious enthusiasm, that one can excuse the flimsiness of the work, for the sake of its artlessness. Having travelled with apparently little more preparation in the way of reading or thought than she would have made for a rummage of Beaudrant’s stores, she describes to us all that she saw at Athens; all the wonders of Constantinople; baths, mosques, bazaars; the Holy City of Jerusalem, a journey across the desert and the gorgeous cherry-coloured umbrella, which shaded Mehemet Ali, the most royal piece of finery she saw at Alexandria. In short, the good-humoured, superficial, positive Londoner is in every page of her journals. 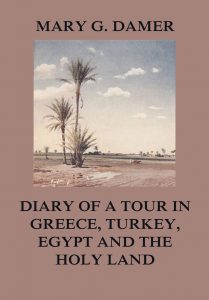 Diary of A Tour in Greece, Turkey, Egypt, and The Holy Land

Diary of A Tour in Greece, Turkey, Egypt, and The Holy Land.