The “Baron’s Yule Feast” is, the author states,” a metrical essay, composed chiefly of imperfect and immature pieces,” some of them written “many years ago:” but which have no doubt been more or less touched in adapting them to the purposes of a poetical Christmas entertainment. The scene of the poem is laid in the baron’s hall of Torksey, in Lincolnshire, which is revived with all the festivities of a Christmas of the olden time. Opportunity is here afforded for the introduction of various songs or narratives in the ballad style. Passing over these, there are a few lines, the concluding ones of the poem, that arrest the reader’s attention, and which are calculated to awaken an echo in the breasts of but too many of the people of England. 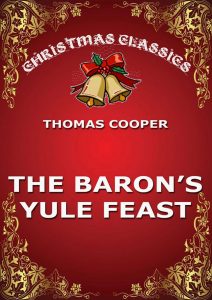