The Little City Of Hope

The hero is an American who has given up his promising career as a professor of mathematics in order to devote himself to the perfecting of an air motor which he has invented. After his money is gone his wife becomes governess and his boy spends his time constructing a little model of the college town his father has left. This they name the “City of Hope” and through it comes to them a Christmas blessing. 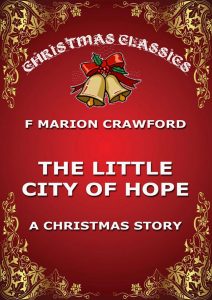 The Little City Of Hope

The Little City Of Hope.