Jules Verne’s conceptions are as brilliant as ever. Dr. Sarrasin, a French savant, simple in taste and absorbed in science, delivers an address at the Brighton Scientific Association. The publication of it with his name in ‘ The Daily Telegraph’ discovers him to a London lawyer as the lost heir of the Begum, whom his uncle had married in India. He inherits a moderate property of twenty-one millions sterling, all ready for him in the Bank of England. Dr. Schultz, a German professor, also a connection by marriage, threatens to dispute it. They settle the dispute by dividing it. Dr. Sarrasin founds in the Rocky Mountains a city of health, modelled on Dr. Richardson’s lines. Dr. Schultz founds at thirty miles distance a stupendous cannon manufactory. One piece fires a shot with a velocity and force that give it perpetual motion. He resolves to destroy Dr. Sarrasin’s city. How he fails and perishes by his own science the story must tell ; but it is prodigious. The magnificence and the verisimilitude are perfect. 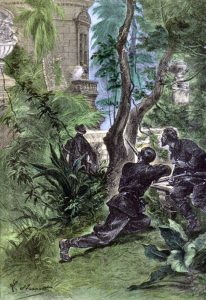 Plot summary of The Begum’s Fortune (from Wikipedia):

Two men receive the news that they are part-inheritors to a vast fortune. They are the last surviving descendants of a French soldier-of-fortune who many years before settled in India and married the immensely rich widow of a native prince – the begum of the title.

One of the inheritors is a gentle French physician, Dr. Sarrasin, who has long been concerned with the unsanitary conditions of European cities. He decides to use his share of the inheritance to establish a utopian model city which would be constructed and maintained with public health as the primary concern of its government.

The other inheritor is a far from gentle German scientist Prof. Schultze – very stereotypically presented as an arrogant militarist and racist, who becomes increasingly power-mad in the course of the book. Though having had himself a French grandmother, (otherwise he would not have gotten the inheritance), he is completely convinced of the innate superiority of the “Saxon” (i.e., German) over the “Latin” (primarily, the French) which would lead to the eventual total destruction of the latter by the former. When first introduced to the reader, he is in the process of composing a supposedly scholarly paper entitled “Why do all French people suffer, to one degree or another, from hereditary degeneration?”, to be published in the German journal Physiological Annals (though his official academic specialty is chemistry). Later it is disclosed that Schultze had done considerable “research” and published many articles conclusively “proving” the superiority of the German race over the rest of humanity.

The Utopian plans of his distant French cousin not only seem to Schultze stupid and meaningless, but are positively wrong. They issue from a Frenchman and are designed to block “progress” which decreed that the degenerate French are due to be subdued by the Germans. Schultze proposes to use his half of the inheritance for constructing his own kind of utopia – a city devoted to the production of ever more powerful and destructive weapons – and even before the first stone was laid in either city, vows to destroy Sarrasin’s creation.

The two (each one separately) quite improbably manage to get the United States to cede its sovereignty over large parts of the Pacific Northwest, in order to enable the creation of two competing city-states, located in southern Oregon at a distance of forty kilometres of each other on either side of the Cascades. One is a tranquil French city of 100,000 on the western side; the other is a bustling German city of 50,000 to the east, with its industrial and mining operations extending far eastward, causing extensive pollution and environmental destruction as far as the Red Desert in Wyoming).

Verne gives the precise location of Sarrasin’s “Ville-France” (France-Ville or Frankville in English translations) – on the southern Oregon coast, eighty kilometres north of Cape Blanco, at 43°11’3″ North, 124°41’17” West. This would place it at the southern end of Coos County, Oregon – a county which already existed at the time, though very thinly populated (and has remained so, having 62,779 inhabitants as of 2000).

The nearest real-life town seems to be Bandon (population 2,833 in the same 2000 census), located slightly north-east of the site of Ville-France, and which was founded by the Irish peer George Bennet in 1873 – one year after Verne’s date for the creation of Ville-France. The Coquille River, on whose southern bank Bandon is located, is presumably the unnamed “small river of sweet mountain waters” which Verne describes as providing Ville-France’s water.

As depicted by Verne, brief negotiations with the Oregon Legislature in December 1871 suffice to secure the grant of a 16 kilometre-wide area extending from the Pacific shore to the peaks of the Cascades, “with a sovereignty similar to that of Monaco” and the stipulation that after an unspecified number of years it would revert to full US sovereignty (Verne does not mention any United States Department of State or Congressional involvement in the deal). Actual construction begins in January 1872, and by April of the same year the first train from New York pulls into the Ville-France Railway Station, a trunk line from Sacramento having been completed.

The houses and public facilities of Ville-France are constructed by a large number of Chinese migrant workers – who are sent away once the city is complete, with the payment of their salaries specifically dependent on their signing an obligation never to return. Reviewer Paul Kincaid noted that “The Chinese coolies employed to build the French utopia are then hurriedly dispatched back to San Francisco, since they are not fit to reside in this best of all cities.”

The book justifies the exclusion of the Chinese as being a precaution needed in order to avoid in advance the “difficulties created in other places” by the presence of Chinese communities. This might be an oblique reference to the Chinese Massacre of 1871, when a mob entered Los Angeles’ Chinatown, indiscriminately burning Chinese-occupied buildings and killing at least 20 Chinese American residents out of a total of some 200 then living in the city.

Most of the action takes place in Schultze’s Stahlstadt (“Steel City”). Steel City a vast industrial and mining complex, where ores are taken out of the earth and made into steel, and the steel is made into ever more deadly weapons. Steel city becomes in a few years the world’s biggest producer of arms. The now immensely rich Schultze is Steel City’s dictator, whose very word is law and who makes all significant decisions personally. There is no mention of Steel City’s precise legal status vis-à-vis the Oregon or US Federal authorities, but clearly Schultze behaves as a completely independent head of state (except that he uses Dollars rather than mint his own currency).

The strongly fortified city is built in concentric circles, each separated from the next by a high wall, with the mysterious “Tower of the Bull” – Schultze’s own abode – at its center. The workers are under a semi-military discipline, with complex metallurgical operations carried out with a Teutonic split-second precision. A worker straying into where and what he is not authorized to see and know is punished with immediate expulsion in the outer sectors and with death in the sensitive inner ones. However, the workers’ conditions seem rather decent by Nineteenth Century standards: there are none of the hovels which characterized many working-class districts of the time, and competence is rewarded with rapid promotion by the paternalistic Schultze and his underlings.

Dr. Sarrasin, in contrast, is a rather passive figure – a kind of non-hereditary constitutional monarch who, after the original initiative to found Ville-France, does not take any significant decision in the rest of the book. The book’s real protagonist, who offers active resistance to Schultze’s dark reign and his increasingly satanic designs, is a younger Frenchman – the Alsatian Marcel Bruckmann, native of the part of France forcibly annexed by Germany in the recent war.

The dashing Bruckmann – an Alsatian with a German family name and fiercely patriotic French heart – manages to penetrate Steel City. As an Alsatian, he is a fluent speaker of German, an indispensable condition for entering the thoroughly Germanised Steel City, and is able to pass himself off as being Swiss – “Elsässisch”, the German dialect spoken in Alsace, being very close to Swiss German. He quickly rises high in its hierarchy, gains Schultze’s personal confidence, spies out some of the tyrant’s well-kept secrets, and sends a warning to his French friends. It turns out that Schultze is not content to produce arms, but fully intends to use them himself – first against the hated Ville-France, as a first step towards his explicit ambition of establishing Germany’s worldwide rule. (He casually mentions a plan to seize “some islands off Japan” in order to further the same.)

Two fearsome weapons are being made ready – a super-cannon capable of firing massive incendiary charges over a distance of 40 km (just the distance from Steel City to Ville-France), and shells filled with gas. The latter seems to give Verne credit for the very first prediction of chemical warfare, nearly twenty years before H. G. Wells’s “black smoke” in The War of the Worlds. Schultze’s gas is designed not only to suffocate its victims but at the same time also freeze them. A special projectile is filled with compressed liquid carbon dioxide that, when released, instantly lowers the surrounding temperature to a hundred degrees Celsius below zero, quick-freezing every living thing in the vicinity.

Ville-France prepares as well as it can, but there is not very much to do against such weapons. Schultze, however, meets with poetic justice. Firstly, the incendiary charge fired by the super-cannon at Ville-France not only renders the cannon unusable, but also misses its mark. The charge flies harmlessly over the city and into space, apparently owing to Schultze’s failure to account for the roundness of the globe when firing a projectile over such distances. Secondly, as Schultze sits in his secret office, preparing for the final assault and writing out the order to his men to bring him the frozen bodies of Sarrasin and Bruckmann to be displayed in public, a gas projectile which he kept in the office accidentally explodes and feeds him his own deadly medicine.

The entire edifice of “Steel City” collapses, since Schultze had kept everything in his own hands and never appointed any deputy. It goes bankrupt and becomes a ghost town. Bruckmann and his friend, Dr. Sarrasin’s son, take it over with the only resistance offered being from two rather dimwitted Schultze bodyguards who stayed behind when everybody else left. Schultze would remain forevermore in his self-made tomb, on display as he had planned to do to his foes, while the good Frenchmen take over direction of Steel City in order to let it “serve a good cause from now on.” (Arms production would go on, however, so as “to make Ville-France so strong that nobody would dare attack it ever again”.)