The poverty of our literature in reference to Mahomet and Mahometanism is so conspicuous and so inconvenient that we may well receive with gratitude the author’s very able endeavour to relieve it. With freedom from prejudice and independence of judgment, he combines an extensive and intimate knowledge of the most authentic sources of information, and, after several years of labour, has produced this volume in the hope of contributing to the complete elucidation and final settlement of Mahomet’s real character and claims. After a careful examination of them, and after comparing them with those of sundry of his predecessors and contemporaries, it appears to us that the author has abundant reason to be gratified with the success he has achieved. Most conscientiously prepared, and based on authorities whom the Moslems themselves appeal to as decisive, his work may be used with equal confidence both by the historian and the controversialist. We heartily commend it to every one who, on so important a subject, desires to have what, on the whole, is probably the best and most complete book in any language, and shall avail. ourselves of it and of other sources of information, in this paper, to present a few of the leading events of the Prophet’s life, with a view to a brief illustration of his character and of the means and meaning of his success. 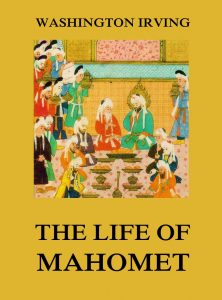 The Life Of Mahomet.

Biography of Washington Irving (from Wikipedia):

Washington Irving (April 3, 1783 – November 28, 1859) was an American short story writer, essayist, biographer, historian, and diplomat of the early 19th century. He is best known for his short stories “Rip Van Winkle” (1819) and “The Legend of Sleepy Hollow” (1820), both of which appear in his book The Sketch Book of Geoffrey Crayon, Gent. His historical works include biographies of George Washington, Oliver Goldsmith, and Muhammad, and several histories of 15th-century Spain dealing with subjects such as Christopher Columbus, the Moors and the Alhambra. Irving served as the U.S. ambassador to Spain from 1842 to 1846.

He made his literary debut in 1802 with a series of observational letters to the Morning Chronicle, written under the pseudonym Jonathan Oldstyle. After moving to England for the family business in 1815, he achieved international fame with the publication of The Sketch Book of Geoffrey Crayon, Gent. in 1819–20. He continued to publish regularly—and almost always successfully—throughout his life, and just eight months before his death (at age 76, in Tarrytown, New York), completed a five-volume biography of George Washington.