The Book of Chicago – Robert Shackleton

In his facile, chatty way the author tells of the city’s marvelous growth, taking us from the Loop through that Olympus of Chicago, the Lake Shore Drive to Oak Park and South Chicago. The landmarks of the early settlers and the “beauty spots” of the modern city are all described in such a manner that they cannot fail to appeal to even the most conservative of Easterners. Mr. Shackleton in all his books of the cities, shows each one distinctly; its characteristics, institutions, literary traditions, landmarks, and its people. Nothing is too small for him to chronicle—their habits of speech, their eating, ancestor worship. In each city he manages to discover many odd corners not found by the usual sightseer. His is a sympathetic, clear-eyed, often humorous interpretation of the city in each case. 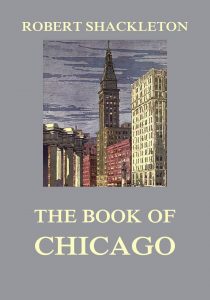