The Book of Philadelphia – Robert Shackleton

The book of Philadelphia is a title suggestive of a large task. Philadelphia is complex, old, still growing, and he who understands her and writes of his understanding so that others may share it must have energy, insight, and skill. Mr. Shackleton’s book bears ample evidence of his powers as an interpreter; his previous efforts at baring the souls of New York and Boston have given him a penetrating vision and a sureness of touch that ﬁnd full scope in his book of Philadelphia. He has given us far more than a guidebook for the tourist or casual sojourner; his observations and comments have a character that should make the book even more valuable to Philadelphians than to outsiders. 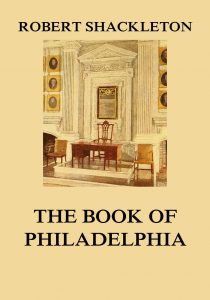 Philadelphia is the largest city in the Commonwealth of Pennsylvania and the sixth-most populous city in the United States, with an estimated population of 1,567,872 and more than 6 million in the seventh-largest metropolitan statistical area, as of 2016. Philadelphia is the economic and cultural anchor of the Delaware Valley—a region located in the Northeastern United States at the confluence of the Delaware and Schuylkill Rivers with 7.2 million people residing in the eighth-largest combined statistical area in the United States.

In 1682, William Penn, an English Quaker, founded the city to serve as capital of the Pennsylvania Colony. Philadelphia played an instrumental role in the American Revolution as a meeting place for the Founding Fathers of the United States, who signed the Declaration of Independence in 1776 and the Constitution in 1787. Several other key Philadelphia events during the Revolution include the First and Second Continental Congress, the preservation of the Liberty Bell, the Battle of Germantown, the Siege of Fort Mifflin, and the Philadelphia Convention. Philadelphia was one of the nation’s capitals in the Revolutionary War, and served as temporary U.S. capital while Washington, D.C., was under construction. In the 19th century, Philadelphia became a major industrial center and railroad hub that grew from an influx of European immigrants. The majority of European immigrants have come from Ireland, Italy and Germany—the three largest reported ancestry groups in the city as of 2015. The city became a prime destination for African Americans during the Great Migration of the 20th century, as well as Puerto Ricans, surpassing two million occupants by 1950.

The area’s many universities and colleges make Philadelphia a top international study destination, as the city has evolved into an educational and economic hub. With a gross domestic product of $388 billion, Philadelphia ranks ninth among world cities and fourth in the nation. Philadelphia is the center of economic activity in Pennsylvania and is home to seven Fortune 1000 companies. The Philadelphia skyline is growing, with a market of almost 81,900 commercial properties in 2016 including several nationally prominent skyscrapers. The city is known for its arts, culture, and rich history, attracting over 41 million domestic tourists alone in 2015. Philadelphia has more outdoor sculptures and murals than any other American city. Fairmount Park, when combined with the adjacent Wissahickon Valley Park in the same watershed, is one of the largest contiguous urban park areas in the United States. The 67 National Historic Landmarks in the city helped account for the $10 billion generated by tourism. Philadelphia is the birthplace of the United States Marine Corps, and is also the home of many U.S. firsts, including the first library (1731), first hospital (1751) and medical school (1765), first Capital (1777), first stock exchange (1790), first zoo (1874), and first business school (1881). Philadelphia is the only World Heritage City in the United States.