The Book Of Enoch The Prophet

The Book Of Enoch The Prophet – Richard Laurence

In the Authorized Version of the Epistle of Jude, we read the following words:–

“Enoch also, the seventh from Adam, prophesied of these, saying, Behold, the Lord cometh with ten thousands, of his saints, to execute judgment upon all, and to convince all that are ungodly among them of all their ungodly deeds which they have ungodly committed, and of all their hard speeches which ungodly sinners have spoken against Him.”

Modern research sees in the Epistle of Jude a work of the second century: but as orthodox theologians accept its contents as the inspired utterance of an Apostle, let us diligently search the Hebrew Scriptures for this important forecast of the second Advent of the Messiah. In vain we turn over the pages of the sacred Canon; not even in the Apocrypha can we trace one line from the pen of the marvellous being to whom uninterrupted immortality is assigned by apostolic interpretation of Genesis v. 24. Were the prophecies of Enoch, therefore, accepted as a Divine revelation on that momentous day when Jesus explained the Scriptures, after his resurrection, to Jude and his apostolic brethren; and have we moderns betrayed our trust by excluding an inspired record from the Bible? 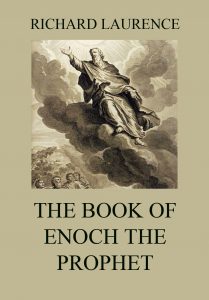 The Book Of Enoch The Prophet

The Book Of Enoch The Prophet.

Background on the Book of Enoch (from Wikipedia):

The Book of Enoch (also 1 Enoch; Ge’ez: መጽሐፈ ሄኖክ mätṣḥäfä henok) is an ancient Jewish religious work, ascribed by tradition to Enoch, the great-grandfather of Noah, although modern scholars estimate the older sections (mainly in the Book of the Watchers) to date from about 300 BC, and the latest part (Book of Parables) probably to the first century BC.

It is not part of the biblical canon as used by Jews, apart from Beta Israel. Most Christian denominations and traditions may accept the Books of Enoch as having some historical or theological interest, but they generally regard the Books of Enoch as non-canonical or non-inspired. It is regarded as canonical by the Ethiopian Orthodox Tewahedo Church and Eritrean Orthodox Tewahedo Church, but not by any other Christian groups.

It is wholly extant only in the Ge’ez language, with Aramaic fragments from the Dead Sea Scrolls and a few Greek and Latin fragments. For this and other reasons, the traditional Ethiopian belief is that the original language of the work was Ge’ez, whereas non-Ethiopian scholars tend to assert that it was first written in either Aramaic or Hebrew; Ephraim Isaac suggests that the Book of Enoch, like the Book of Daniel, was composed partially in Aramaic and partially in Hebrew.:6 No Hebrew version is known to have survived. It is asserted in the book itself that its author was Enoch, before the Biblical Flood.

The authors of the New Testament were familiar with the content of the story and influenced by it: a short section of 1 Enoch (1 En 1:9 or 1 En 2:1 depending on the translation) is quoted in the New Testament, Epistle of Jude, Jude 1:14–15, and is attributed there to “Enoch the Seventh from Adam” (1 En 60:8). The text was also utilised by the community that originally collected the Dead Sea Scrolls.