The Book of New York is full of delightful reminiscences and intimate descriptions of one of the most individual cities of the world. It is really a literary excursion, on foot, to various localities, new and old, which are a vital part of the big metropolis and its environs. One wanders at will through illuminated pages to the Bowery, Wall Street, City Hall Park; through the tenement districts, Madison Square, Union Square, Riverside Drive and, last but not least, that motley place of modern dreamers, Washington Square and Greenwich Village. One breathes the atmosphere of Peter Stuyvesant’s old haunts, of the famous Fraunces Tavern, the romance of the Little Church Around the Corner. 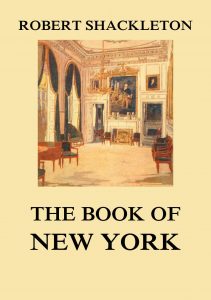