The Chronicles of Count Antonio

Mr. Anthony Hope is finding out his enviable position. Do what he will, he has the power to please most people. Whatever be his moods, and whatever the quality of his performance, he is never awkward, and elegance of form in any literary matter popularly interesting is so uncommon that gratitude and admiration are widespread and intense in proportion. Now that he is finding this out, it is not surprising that he should take advantage of it, and give pleasure to his numerous admirers as frequently and with as little trouble to himself as possible. It is impertinent to pry into the state of Mr. Hope’s soul to see if it is growing demoralised by easy triumphs, but it is quite justifiable to say that a little more effort than is to be found in this book is wanted to keep to the estimate which some sincere but discreet admirers have formed of his powers. The stories here are entertaining, and the youth of fourteen who should disapprove of them would do so from mere dulness. But there are features in it that would lead one to believe they were not written for lads in their early teens. Yet it is not exactly a book for men and women, to whom the tales, excellent in imagining as many of them are, must be spoilt by the artificiality of the mechanism, and the conventionality of all the motives, feelings, and expressions, of the human beings concerned. Mr. Hope is a novelist of power, and he gives us an unimpeachable gift-book of a quality equalled by a dozen boys’ story writers any Christmas. His Antonio he calls an outlaw ; but he is the outlaw of a maiden-aunt’s or a schoolmaster’s imagination—compounded of demi-god and family pastor. True, he appears to us through the narrative of a holy father, but Mr. Hope chose that medium, and if it was unsuitable for the rough record of the wild men who took to the hills, he is responsible. There is no lack of blows and battling, but all the rough play is carried on in so genteel an atmosphere that it sounds like sham-fighting all the time. 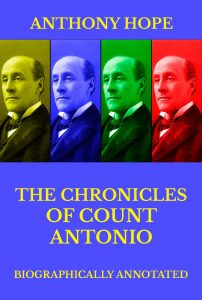 The Chronicles of Count Antonio

The Chronicles of Count Antonio.