The Indiscretion of the Duchess

The Indiscretion of the Duchess – Anthony Hope

“The Indiscretion of the Duchess” may be classed with “The Prisoner of Zenda,” and shares with that story the unabated interest from first page to last, and the superb handling of the romantic and adventurous. Even if this book had been published anonymously, a mistake as to its author’s identity would have been impossible: Mr. Hope’s touch as we have learned to know it is here on every page, almost in every line, and a successful touch it is, indeed. The book furnishes pleasant reading; it is one of those rare boons—a story that will rest and refresh the brain of any person whose occupation involves continuous and serious mental work. 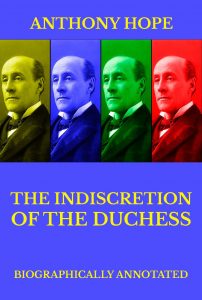 The Indiscretion of the Duchess

The Indiscretion of the Duchess.